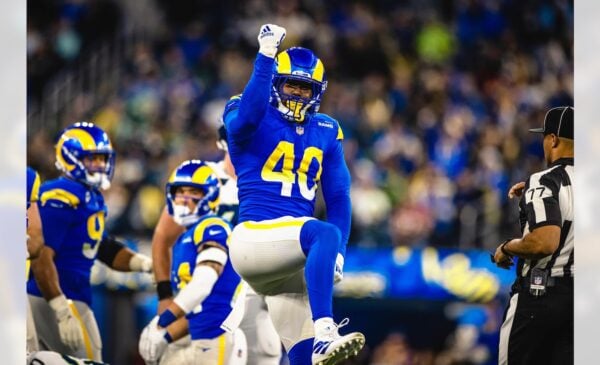 Von Miller‘s watch ended in a way most fans were not expecting. After Von teased going back to Denver, then Dallas, and Cleveland, suddenly the Buffalo Bills entered the chat. The Rams most likely made a compelling pitch to run it back with Aaron Donald but the Bills gave Von an offer that moved him…TO A BIGGER HOUSE!

Von is getting 6-year $120 million deal with the Bills and at 33, Von would’ve been silly NOT to take it. He’s getting his second deal worth $100 million+ and that’s not something anyone would turn down.

Does this suck? Yes. But Von came to LA and did exactly what the Rams wanted after trading a 2nd and 3rd for. He was beyond instrumental in getting the Rams a ring and there should be no sour grapes from fans. Hell, any fanbase would take that deal every day and twice on Sunday. However, there are two questions that need to be answered, 1) Is this it for Aaron Donald in LA? Probably not. And 2) Now what? The second question doesn’t have an easy answer.

Unfortunately, while the Rams were working around the clock to re-sign Von, they missed out on Chandler Jones, Myles Jack, Obo Okoronkwo, and other pass rushers. Again, it sucks but that’s what happens. The Rams were confident they were going to retain Von but at that price, it made total sense for Les Snead to decide it was too rich for his blood. That doesn’t mean that the Rams are now the lone team without a viable pass-rusher.

There are several options out there and while there isn’t a direct replacement for Von there are other players available that can help fill the void. After all, you can stick anyone with Aaron Donald and that player will see their stats take a massive leap. So who are the most likely candidates to attempt to replace Von?

There was a running joke (delusion?) that somehow the Rams would re-sign Von and also get Bobby Wagner. Wagner is the next most coveted free agent. He was unceremoniously released by the Seahawks and it’d be nice to have him both to fill the void and to beat up on his former team twice a year while they’re in the process of rebuilding. He’s still got a lot left in the tank and would be a valuable asset in coverage. Granted, he plays ILB while Von played EDGE, but would still be a very nice consolation prize.

Both players don’t have the type of pass-rushing ability Von Miller had but both would fill a similar void. They’d both likely thrive playing with Aaron Donald and Leonard Floyd.

Houston is the most comparable to Von. Houston is also 33 and is hungry for a ring. He’s still got a lot in the tank and playing with Donald is bound to keep him looking young and virile.

It’s possible the Rams also reach out to Jadeveon Clowney but they never really had much interest in him. It’s possible that with whatever money they free up they perhaps go a different way. They could shore up their secondary with Stephon Gilmore and maybe a Dante Fowler (but please not Fowler) and all their in-house guys such as Terrell Lewis, Justin Hollins, and Chris Garrett could compete to fill in the Von void.

Von Miller was the ultimate luxury and with the AFC West, in particular, loading up on pass-rushers, the Rams have their work cut out for them. The good news is that the Rams are never afraid to make an aggressive move so they aren’t going to roll over and just allow this void to linger. “Run it Back” was always going to be a mountain to climb but now it just got a lot harder.

Fans should thank Von for what he was able to do in half a season with the Rams and while it sucks he’s gone and the Rams are only getting a 5th-round comp pick, he leaves the team with a trophy to defend.