The Chargers are coming off a bye week with many unanswered questions. Sitting at 4-7, their season seems lost as they will most likely miss the playoffs. Perhaps the recent bye week was put to good use and they were able to get the necessary rest to compete for the remainder of the season. Their defensive line did not dominate in their last game against the Chiefs. Their contest against the Denver Broncos this Sunday will show just how much work needs to be done in the offseason.

Review Vs The Chiefs

In the middle of the fourth quarter, the Chiefs faced 3rd-and-6 from the 50-yard line. Patrick Mahomes tried to dump a screen pass but the Chargers rushed his throw which fluttered harmlessly to the ground.

Late in the fourth quarter, the Chiefs faced 3rd-and-4 from the Chargers 42-yard line. Ingram sacked Mahomes to end the drive.

Early in the first quarter, the Chiefs faced 3rd-and-20 from their own 29-yard line. Joey Bosa tried in vain to complete a spin move on Mitchell Schwartz but the veteran offensive lineman could not be fooled. Fortunately, the pass was incomplete, ending the drive.

In the middle of the second quarter, the Chiefs faced 1st-and-Goal from the 6-yard line. LeSean McCoy took the handoff and plowed into the end zone off tackle.

Early in the third quarter, the Chiefs faced 1st-and-10 from the Chargers 14-yard line. McCoy rushed to the left and squeezed through two defensive backs before being stopped for an eight-yard gain.

On the next play, the Chiefs gave the ball to Darrel Williams who rumbled up the middle for a touchdown.

Late in the first quarter, the Chiefs faced 3rd-and-7 from their own 18-yard line. Mahomes could not find anyone open and decided to scramble up the middle. Ingram was the last line of defense and he chased Mahomes for more than 20 yards as the quarterback picked up the first down.

Early in the third quarter, the Chiefs faced 3rd-and-2 from their own 37-yard line. Mahomes dashed to the first down mark, juked Thomas Davis and was finally stopped 18 yards down the field.

Late in the fourth quarter, the Chiefs faced 3rd-and-6 from their own 37-yard line. Mahomes saw the pressure from his right and to his left. He went untouched for 15 yards, easily converting the first down.

Preview Vs The Broncos

Much has changed since the Chargers last played the Broncos. Their defensive line was relatively thin but they made up for it with decent play. Despite being without Melvin Ingram they still managed to collect three sacks in the 20-13 loss. However, this was the lone bright spot on an otherwise miserable day.

The defense surrendered 114 yards on the ground to Phillip Lindsay on just 15 carries. Overall the defense allowed 191 yards on the ground, by far the most the Broncos have recorded in a game all season. Unfortunately for the Chargers, they have yet to solve their weakness against the run.

There are a few differences between this meeting and the last meeting with the Broncos. Denver has continued it’s search for a franchise quarterback by starting Brandon Allen the past three games. His performance this season has been erratic. Two weeks ago against the Vikings he threw a career high 270 yards in a 27-23 loss. Last week he threw for a paltry 82 yards in a 20-3 loss to the Bills.

The Broncos ground attack has chugged along at a steady pace between Lindsay and Royce Freeman. They did have a down game against the Bills last week, only recording 77 yards on the ground. However, due to the Chargers poor performance against them earlier in the season it would be unwise to overlook their running game. This game will answer some of the many questions which have been hounding the Chargers organization all season. 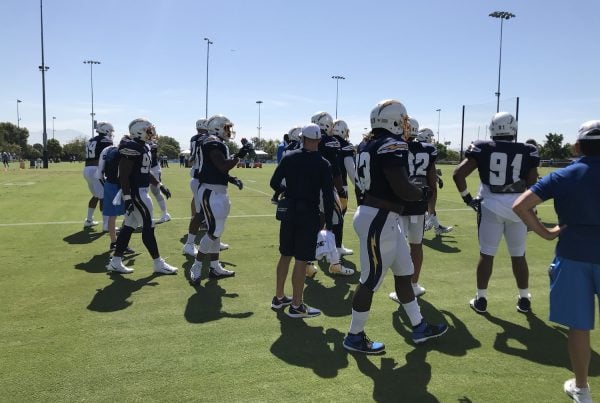