Often in the film industry, a film will sell really well due to a particular character or a set of characters which do well in destroying the status quo. Luckily for the Chargers, they have four individuals on the defensive line who live for destroying the status of opposing offenses. This group of individuals is not so much a Band of Brothers but rather the A-Team, which was a group of uniquely qualified individuals whose main objective was to inflict physical punishment on their opponents. This season, we will be following this group closely and will see how much fun it is to wreck havoc on opposing offenses.

Joey Bosa, DE – He is only going into his fourth season and yet he is easily the most accomplished of all the Chargers defensive linemen. He was drafted third overall in 2016 and was named NFL Defensive Rookie of the Year after recording 10.5 sacks. He was named to his only Pro Bowl the following year after racking up 12.5 sacks and starting every game of the season for the only time in his young NFL career.

He missed the first half of the 2018 season due to injury and only recorded 5.5 sacks. However, his presence was felt as the year went along and he was instrumental in the team reaching the Divisional Round of the playoffs.

Jerry Tillery, DT – Expectations are high for the Chargers top draft pick. While he had a slow start at Notre Dame, he proved himself during his final two years with 11.5 sacks. He also forced three fumbles during that same time span. He has great length, standing 6’6”, and his arms measure 34.25 inches. Perhaps with a bit of coaching, he can develop the ability to bat down passes like J.J. Watt of the Houston Texans.

Justin Jones, DT – Jones is the slated starter on the depth chart and has earned it this offseason. Tillery will be nipping at his heels all season, but for now, the job is Jones and he should perform great in stopping the run game.

Brandon Mebane, NT – At 34, he is the oldest player on the Chargers defensive line. He only has 17.5 sacks in his career but he has collected a phenomenal 440 tackles. Standing 6’1” and weighing 311 lbs, he is a good size for a nose tackle.

Melvin Ingram, DE – Ingram is relatively small for a defensive end, standing just 6’2” and weighing just 247 lbs. However, his greatest attribute is his speed. He ran a 4.79 in the 40-yard dash at the NFL Combine in 2012. He has been invited to the past two Pro Bowls while collecting 17.5 sacks during that span. He has 42 sacks for his career.

The Colts were dealt a major blow a couple of weeks ago when star quarterback Andrew Luck abruptly retired. His replacement, Jacoby Brissett has had moderate success in the NFL when placed in the right situation. Their offensive line will have to work extra hard to ensure he will not get discouraged from playing well.

Luckily for him, the Colts feature one of the better offensive lines in the NFL. Anthony Castonzo is a stalwart at left tackle having started 116 games since being drafted in 2011. Quenton Nelson established himself as one of the best left guards in the league last year as a rookie. He was named first-team All-Pro and invited to the Pro Bowl at the conclusion of the 2018 season.

Ryan Kelly had a great career at Alabama, winning the Rimington Award as the nation’s top center and was named first-team All-American while winning three national championships. He has yet to be invited to the Pro Bowl but his time is coming.

Right guard Mark Glowinski started his career in Seattle, starting in parts of both the 2016 and 2017 seasons. He signed with the Colts late in the 2017 season. He started the 2018 season as the back up to Matt Slauson. After Slauson was lost for the year due to injury, Glowinski was named the starter for the last half of the season.

Right tackle Braden Smith has had a relatively short career, being drafted just last year in the second round. He started in 13 out of 15 games he appeared in and it appears that the Colts see him as their right tackle of the future. At 6’6” 315 lbs, he is the perfect size for an offensive tackle.

The Colts offensive line has a lot of potential and it is clear that they are built for the long haul at most positions. However, due to injury and inexperience, their weakness lies on their right side, specifically at right guard where the starting spot was simply a carousel of injuries last season. Joey Bosa and Melvin Ingram should have no problem lining up against their tackles and the Chargers may not even have to blitz on the right side because Ingram should be able to overwhelm Braden Smith with his athleticism.

The Colts may be able to run effectively on the left side as that is their strength. The combined strength and intelligence of Castonzo, Nelson and Kelly should be a great matchup for Bosa, Tillery, and Mebane.

In summary, Brissett’s season should start more promisingly than in 2017 when the Colts were blown out by the Rams 46-9. However, in the end the Chargers defensive line should prove to be too much for the Colts offensive line. 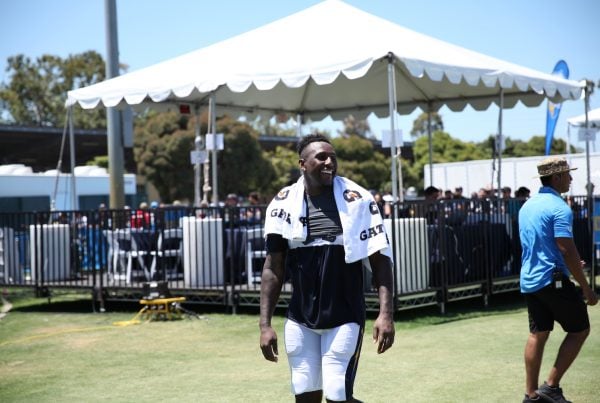