The 2022 Rams Schedule: A Look At The Competition and A Record Prediction

The NFL schedule release is a funny spectacle on the offseason calendar. The opponents have been set since the final day of the regular season. We’ve known the ‘WHO’ for months. The NFL schedule is on a simple rotational formula. (I personally have the Rams schedule mapped out on a spreadsheet till 2030. You don’t?)

But to say that ‘WHEN’ the games fall on the calendar isn’t important or interesting or at least fun would be to go against my first rule of sports fandom. Rule #1: Football is fun. Enjoy it!

You have to hand it to the NFL, the middle of May is the best time to pour over the schedule. Isn’t it?  Each team has taken its newest form. They’ve added their draft picks and free agents. A rough sketch of what each team will look like has emerged and now we have the season, right there in black and white. Dates, times, and locations.

All 272 NFL games are right there in front of us. It’s a time of optimism. The ledger has been wiped clean. Everyone is undefeated. From the Jacksonville Jaguars to your Super Bowl Champion, Los Angeles Rams. Every team is on an equal playing field, 0-0. The pure untapped potential of a new season.

The Rams schedule is a slate of very stiff competition. The combined 2021 winning percentage of the teams they play this season is .567. Which according to Larry Holder via The Athletic, means the Rams schedule is the hardest schedule in the league.

Using last season’s win totals to map out the strength of schedule, however, has been criticized, and for good reason. Teams change drastically from one season to another.

Warren Sharp has been critical of that methodology and has come up with his own. He uses projected win totals from Vegas oddsmakers. So how did the Rams fare when looked at through that lens? Not much better. Sharp ranks the Rams schedule as the second hardest schedule in football.

There are three factors at play. One, the NFC West is on the Rams schedule. It’s hard to argue that any of the other teams in the NFC West have actually improved greatly, but San Francisco (9.8) and Arizona(9.1) are projected to win between nine and 10 football games and divisional games are always harder-fought contests.

Two, this year the NFL scheduling rotation pits the NFC West against the AFC West. The AFC West has snatched the ‘Best Division’ chain from the NFC West. Three of the four teams are projected by Vegas to win between 10 and 11 games. (Chiefs 10.6, Chargers 10.2, and Broncos 10.1) The Raiders aren’t far behind at 8.5 projected wins.

These win totals take into consideration that the AFC West has to play itself and the NFC West. All the AFC West teams are ranked in the bottom half of Sharp’s strength of schedule rankings. The Broncos have the easiest ranked at 17 and the Chiefs take the cake with the hardest schedule in the league. This points to the third factor.

In NFL scheduling there are three ‘one-off’ games played against teams that end the previous season ranked at the same place within their given division. So, the Chiefs won their division, therefore those three games will be against division winners. The Broncos finished fourth, so they will play three last-place teams. That means the Rams will play three first-place teams as well as the two best divisions in football. That’s the Bills, the Packers, and the Cowboys.

To further shed light on just how hard this schedule is. Allow me, if you will, to go to the Vegas sportsbook to make an even finer point. DraftKings Super Bowl odds currently look like this:

The Rams schedule has nine games against what Vegas believes to be the eight best teams in the world right now. The good news is that the Rams are considered to be among the best. So while this schedule is daunting, the Rams are not outmatched by any of these teams, it just means the margin of error in order to get back to the Super Bowl is paper-thin.

This category is easy. These are teams that the Rams are better than and will be favored to win by a good margin. Atlanta Week 2, Carolina Week 6, and Seattle Weeks 13 and 18.

McVay doesn’t drop games to Should-Win opponents often but there have been a few over the years. The 2020 games to the Jets and 49ers come to mind.

The game to keep an eye on will be the Panthers game. They have an underrated defense that is anchored by a very good pass rush. That said it’s hard to imagine the Rams aren’t 4-0 in these games.

This category is made of competitive teams and the Rams will be favored to beat them but by a narrower margin.

The 49ers and Cardinals games are mysteries right now. Is it the beginning of the Trey Lance era and the end of the Deebo Samuel era? Which Cardinals team will the Rams face? Will it be the 2021 week 4 version or the week 14 one?

Either way, the Rams are a better team than both the Cardinals and the 49ers. They should be favored to win in these games. But that was true last season and they ended up going 1-3 in those games.

The remaining three games are just as mysterious. All three teams have gone through significant changes. The Raiders have done their best to add firepower and look better than any Raiders team in recent memory. The Cowboys and the Saints are on the other side. They have lost more firepower than they have added.

With the quality of the rest of the Rams’ opponents beating teams like these will be far more important this year than it was last year. Record against this category 5-2.

The Broncos and the Chargers are on the come-up. Tampa Bay and Green Bay are trusting that their old men quarterbacks (who are also two of the best quarterbacks ever) can still compete at the highest level.

The Rams play in Tampa Bay during McVay’s dead month of November. He has gone 8-9 in all games in November and a shocking 1-6 in road games in the month. (The Rams will also play the Saints and the Chiefs on the road in November.) The Rams have the upper hand in the rivalry. They have played each other four times in the last three seasons with the Rams coming out on top in all but the first meeting in 2019.

The remaining games are all consecutive starting with the Rams traveling to Green Bay for week 15 followed by the Broncos at home and the Chargers on the ‘road’ in week 17. The Packers played the Rams twice in the 2021 calendar. Once in the 2020 playoffs and last season in November. Both games took place in Lambeau and both resulted in losses for the Rams.

By weeks 16 and 17, it should be very clear just how good the Broncos and Chargers are. Right now it is clear that Justin Herbert is going to be a force to be reckoned with.

The Broncos on the other hand will take some time to see how quickly Russell Wilson will gel with his new team. If it’s a good fit, it’s hard to believe that offense won’t be humming along.

This final stretch will be a tough three-game murder’s row on the Rams schedule. Not only is it the run-up to the playoffs that will determine playoff seeding, but it will test the mettle of the Rams’ depth chart as an entire season of aches, pains and fatigue mount up.

Record against this category 2-2

The Two Games of the Century!

The Rams schedule has two of the best games of the year on it. The Bills in week one and Chiefs in week 12 The Rams have played one game with the Chiefs and the Bills in the McVay era and they both have been bonkers! I won’t spend time recapping those games but go to YouTube right now if you don’t remember them.

Expect the same toe-to-toe slugfest again this year. McVay has never lost a week one game and, as noted early, won only one road game in November.

Predicting football is a fool’s errand in general and predicting this game is even more foolish. These games will come down to the final drive. But a gorgeous untouched schedule demands thorough prediction. The Rams split the two games; 1-1. 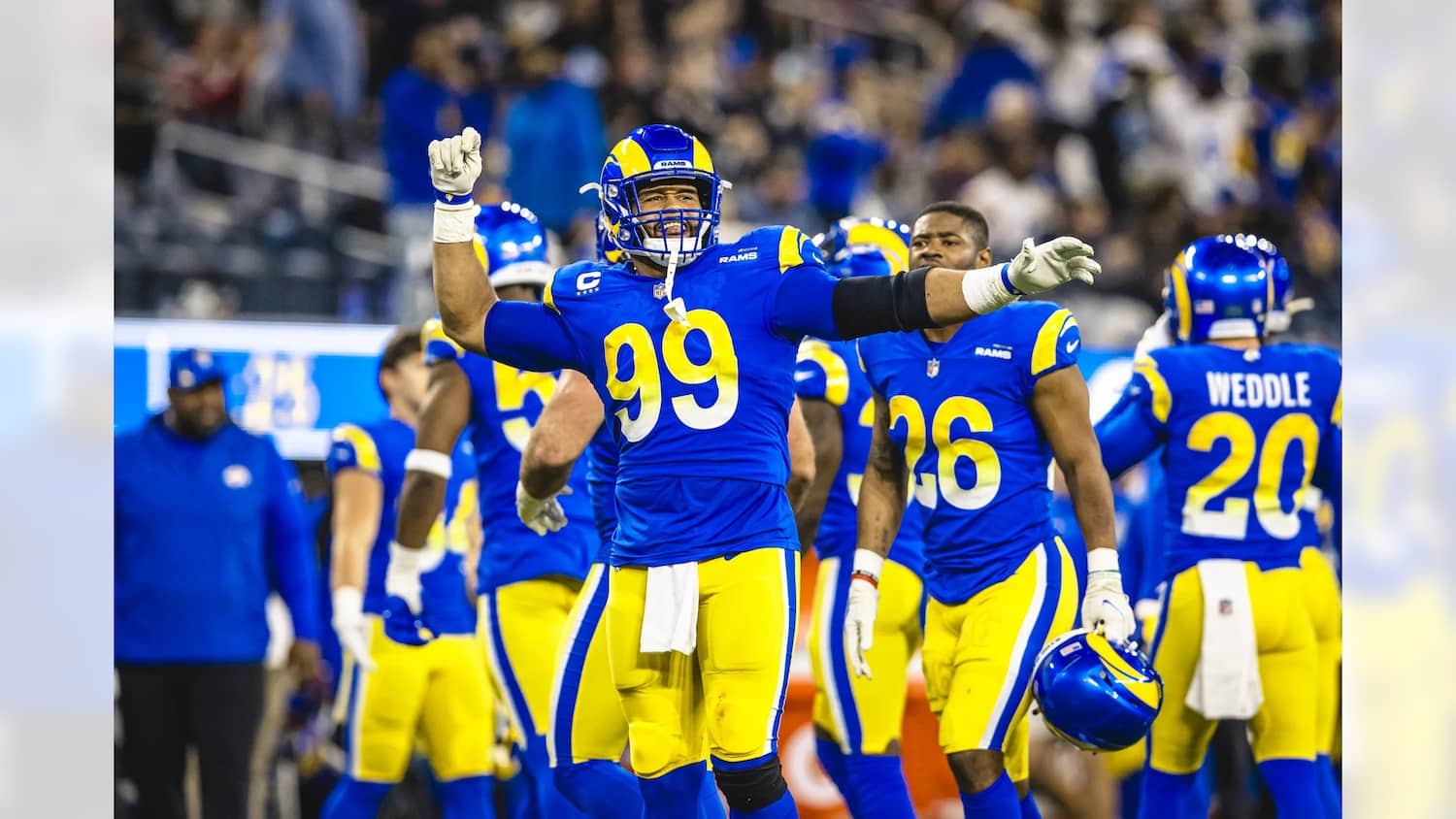