The Rams preseason kicks off this Saturday against the Chargers in the friendly confines of SoFi. Here are 3 positions to watch in the game. 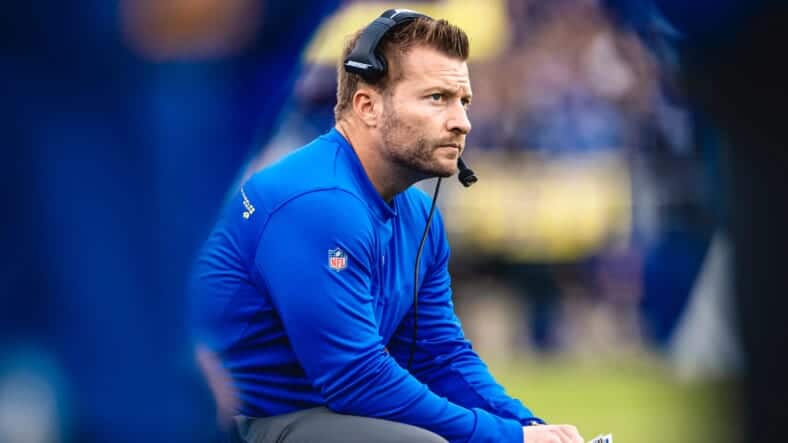 Watching a Rams preseason game is not for the casual Rams fan. Sean McVay famously doesn’t play starters in exhibition games. Not one series or even one snap. So you won’t be getting first looks at Allen Robinson or Bobby Wagner. No Aaron Donald. No Matthew Stafford. No Cooper Kupp. But there is still plenty to learn about the Rams and who will fill out the rest of the roster for the rapidly approaching season.

But then again if you are reading this, you probably already know that and you definitely aren’t a casual Rams fan. So here are the top things to watch during this Rams preseason game.

Brandon Staley isn’t just one of the many branches of the Sean McVay coaching tree. He very well could be the best coach on the tree. Would the NFL have caught on to Staley’s genius defensive mind without McVay? Eventually. But McVay was the one that pulled Staley, just three years removed from John Carroll University, and put him and, what would become, the top defense in the league on the national stage. A few months later, Staley now has one of the most exclusive jobs in the world.

Not only that, but Staley’s Vic Fangio-derived defense will soon be one of the predominant systems in the NFL. McVay opted to keep Staley’s light box front with two high safeties when he moved on to coach the Chargers after just one season with the Rams.

And why did McVay decide to hire Staley in the first place? Because McVay had such a hard time running his offense against that style of defense. Learning the defense that could lessen the risk of big plays was a big reason that the Rams were able to stifle Ja’Marr Chase and Joe Burrow in the Super Bowl. Staley’s forward-looking defense and McVay’s willingness to learn that defense, in part, won the Rams that game.

The McVay vs Staley matchup is different from the one McVay has with Kyle Shanahan. That one has always been framed as more brotherly. With Staley, it’s more like two scientists that came together in a lab to learn what they could from one another and now are in an arms race to achieve football domination. There is a very real chance that the two teams could meet again in the next Super Bowl.

In the meantime, Saturday’s game will be the second meeting between the two coaches. The first was a 13-6 Chargers win. Of course, that game and this game are preseason games. Staley has taken McVay’s position when it comes to playing first-stringers. But regardless of how much this game matters, it’s great to watch two of the best go at it. And both coaches are incredibly competitive and want to come away with a win. So even if it doesn’t matter, it matters.

That said, each team will have to play their cards close to the vest. Staley and McVay will face off in the first regular season game of their burgeoning rivalry. Neither will want to put anything on tape that could give the other an advantage come week 17. This means both teams will run simplistic gameplans, made up of players trying to make the roster. It’s not the best or most exciting version of football, but this stripped-down version of football in the hands of McVay and Staley is a lot of fun to watch.

And what makes it all the more fun is that they play football in the same town and even the same stadium. As a reminder, LA sports fans, stay classy on Saturday. Use your words and have fun!

The competition in the wide receiver room was already hot with so many good players in the room. It’s become even more important now that Van Jefferson is recovering from surgery. Ben Skowronek has been the depth piece that the Rams have looked to the most of the group. In his rookie season, he got a crash course in pro football when injuries ravaged the team. And so far this year in camp the Rams have put him a rung above the others. He logged the most reps with the first team of the depth receivers.

During training camp Rams offensive coordinator Liam Coen praised Skowronek as playing more advanced football than an average sophomore in the league. Coen also said Skowronek had earned the trust of offensive coaches and noted his versatility as a receiver. The thing to watch with Skowronek is how much he actually ends up on the field against the Chargers in the Rams preseason game. He may have already played himself into a larger role on the team and thus might not play much.

The much maligned, Tutu Atwell has started his road to redemption. He made big strides at training camp this season. Those steps translated to big plays. There were several instances where his potential to stretch the field was on display. The next big step will be to prove it in a competitive setting. Atwell will have a chance to test his speed against one of the fastest rookie safeties in this Rams preseason game, J.T. Woods.

Both posted sub 4.4 40 times with Woods edging Atwell by .03 seconds. Word out of Chargers camp is that Woods is going through rookie growing pains, so Atwell may have the edge with experience (As weird as that is to say.) Atwell’s speed is not just a big play deep threat, it can also be used to create more space underneath.

Rams vs. Chargers: Who wins Preseason game? – Powered By PickUp

Brandon Powell will also see a good amount of playing time in the Rams preseason game this weekend. Powell is more known as a punt returner, but the Rams have been trying to find a spot for him as a contributor on offense. That attempt evolved over the duration of the training camp. He started off by being a check-down short pass option, later they used him in the backfield and by the end of camp he was running slant, curl, and dig routes. Powell has sure hands, moves well in space, and isn’t afraid to do the dirty work, but still needs to prove he can get open.

Jacob Harris is also in the mix for playing time with the first team, but a groin strain will likely keep him out of playing in the Rams preseason. Harris has officially made the move from tight end to wide receiver. He is a big and athletic receiving threat but has missed a lot of time due to various injuries including a season-ending ACL/MCL injury.

Another receiver to watch during the Rams preseason games will be Lance McCutcheon. McCutcheon is a rookie undrafted free agent out of Montana State. The Rams may have found a would-be farm team in Montana State. They also drafted Daniel Hardy from there. McCutcheon is big and strong with great length. He isn’t thought of as a fast player, but neither was Cooper Kupp and when you are as big as McCutcheon, you don’t need to be. He is a contested catch machine. McCutcheon made an impact during spring practices making several impressive catches but hasn’t made much noise since then. He will get a chance to make his presence felt in the Rams preseason.

The inside linebackers behind Ernest Jones and Bobby Wagner are far from household names. The Rams have Christian Rozeboom and Jake Gervase listed as the second string on the unofficial depth chart and Jake Hummel and Anthony Hines III behind them. These will be the starters for the Rams preseason.

Students of the Rams practice squad will recognize Rozeboom and Gervase. Both have been called up to fill out the special teams roster when needed.

Travin Howard is also signed but the last news about him was a groin surgery and he may be ready by the start of the regular season, per Ian Rapoport.

So these four will get plenty of experience over the next three weeks of Rams preseason.

Rozeboom has had a good training camp. He has added some athleticism to his game and is better than expected in coverage. He made several pass breakups during 11-on-11s.

The Chargers are in the midst of a three-way competition for the second running back position.

Joshua Kelley, Isaiah Spiller, and Larry Rountree are all vying for that spot. A good showing from one will go a long way in that player’s case for the job. The Chargers may be interested in giving them a good amount of handoffs to give themselves enough evidence to work with. This means these linebackers could have a long day clogging the running lanes ahead of them. Not ideal as far as the final score goes, but a great chance during the Rams preseason for them to develop as linebackers.