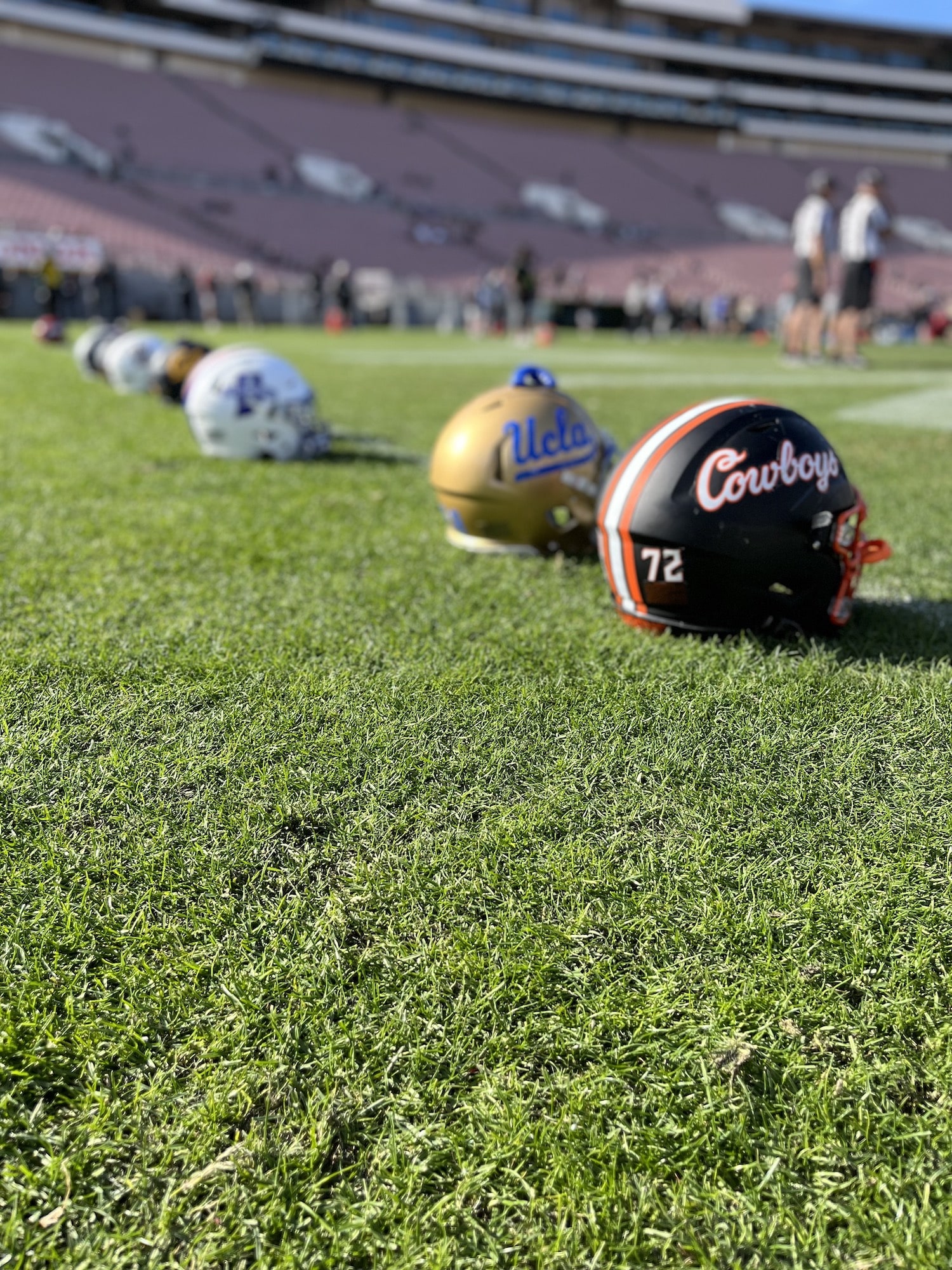 In his senior season at Bonita Vista High School, Greg Bell ran for 2,632 yards and punched in 34 touchdowns. During the NFLPA Bowl practices it was apparent how he got that done; Speed. There are many ways to categorize speed, his speed might be called zippy. He isn’t just a fast runner, he does everything quickly. He cuts quick, he spins quick, he gets to the hole and the edge quick. He can probably eat his Wheaties before they get soggy.

The one thing that wasn’t fast was finding his college football home. He started off at Arizona Western Community College, which obviously wasn’t meant to be the final stop. After two seasons he left as the number 2 ranked junior college running back. He then join the Cornhuskers and Scott Frost, but after four games he decided to transfer out of Nebraska saying, [I] ‘…feel I am not being used to my fullest potential.”

He transferred to San Diego State but suffered a freak eye injury that prevented Bell from playing during the 2019 season and then the Aztecs played a shortened season because of a virus that shut down most of the world, and Bell also injured his foot.

Finally, in 2021, Bell was healthy and at home. He was being fully utilized in Brady Hoke’s run-heavy system and he was not far from where he grew up in Chula Vista, California.

Finally settled, Bell had a very good season. He was the team’s lead back, rushing for 1,098 yards and nine touchdowns. But he also shared the backfield with three other running backs and two mobile quarterbacks. Those five collectively had more attempts than Bell. This could be the reason he didn’t garner more attention. The team ended the season 12-2 including a win at the Frisco Bowl. Bell went for 101 yards and a touchdown in that game.

It could be argued that his fullest potential wasn’t tapped even as the top dog in the SDSU backfield. Hoke’s offense focuses on inside zone play. With his speed, Bell would benefit from running in more outside zone, which accounts more for the defense’s second-level tacklers.

He was also underused in the passing game. In NFLPA Bowl practices he showed the ability to catch and turn up the field. In seven games in 2020, he caught 11 passes for 114 yards. In 2021, he caught 4 passes.

If Bell lands in the right offense, he could be a quality contributor in the NFL.

Could I interest you in a 6’5” 213 lbs wide receiver that could (probably) drive an aircraft carrier if you needed? Well, Mychal Cooper is your man. In all seriousness, when asked what he was going to do after graduation his reply was, ‘Probably Surface Warfare.’ If he wants to put that on hold, Cooper might find playing in the NFL stimulating, as well.

Cooper has work to do to compete in the NFL, but what he needs are coaching and experience. To say Navy is a run-heavy offense would be understating it. Navy threw on average fewer than 10 times per game last season. So keep that in mind when considering Cooper’s numbers. Cooper caught 44 passes in four years of school. To put that in perspective, Western Kentucky’s Jerreth Sterns caught 150 passes last season alone.

But what he does have is the raw elements; big, strong, and fast with hands and a heaping scoop of discipline. Highpointing catches is what he does, give him some footwork and hand fighting skills, and BOOM a red zone machine.

In the NFLPA Bowl practices, Cooper stood out for his ability to physically dominate corners and haul in catches. That was also on display in the game itself. His biggest play was a 30-yard catch that he laid out to snag. His length made that catch.

Earlier I made light of what a member of the Naval Academy could bring. But what is genuinely and irrefutably true is that the members of our armed services come out with many intangible skills. One of which is leadership. Cooper was named captain of captains. That means he was not only a captain of the Midshipmen football team but also of all 33 varsity teams at Navy.

There is a reason that the Patriots target players that were captains of their college teams. A team would get something superbly tangible by drafting Cooper.

Dai’jean Dixon is easily the standout from the NFLPA Bowl. Not only did he ‘wow’ the crowd of NFL scouts, agents, and media lowlifes during practice, but he put up an astonishing 131 yards at 21.8 yards a pop and a TD in the game itself.

It isn’t unusual for a skill position player from a big school to dominate in a game like the NFLPA Bowl. There’s a reason they were recruited and then they benefit from all the trappings of playing in a huge program. But! Dixon didn’t and he still dominated from the first practice till the end of the game.

Dixon finished his college career 2nd all-time in the Southland in receptions, 3rd in receiving yards, and 4th in touchdowns catches. He is tall with good length and is also strong. He is big and tough and isn’t shy about it. That comes across against corners, but that comes across in his blocking too.

Dixon is the kind of talent that begs the question: How has this guy flown under the radar. Mainly it’s attending the tiny Nicholls State University. Not to pick on the Colonels, but their total enrollment is about one-tenth that of, for instance, the University of Florida. The point is that athletes from small schools get overlooked all the time. It’s a catch-22 to negotiate between exposure and playing time for guys like Dixon.

Dixon chose to attend a smaller school despite being recruited by larger schools like Troy, the University of Louisiana, and Louisiana Tech. An interesting comparison is his high school teammate, Racey McMath. He chose to play among some of the most talented wide receivers in the nation at LSU. McMath finished his college play with 33 catches for 522 yards. Dixon caught 71 passes for 1,002 yards and eight touchdowns last season alone. McMath ended up getting drafted in the sixth round by the Titans. Seeing where Dixon lands will shed light on if there is a better bargain to make.