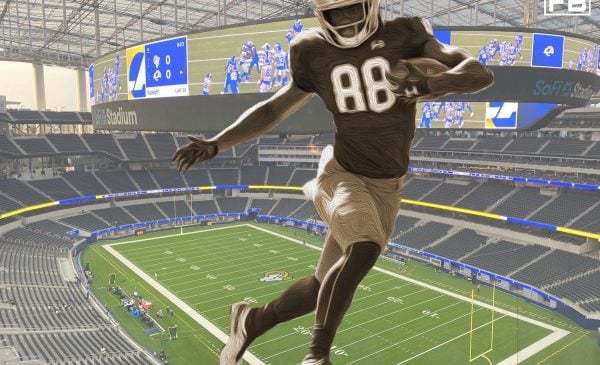 How are we already on the last round of the draft? By now the bright lights have moved on and only the obsessed are still paying attention at this point. But that is who we are and that is who this is for.

At this point in the draft, the Rams will have addressed the most pressing needs and have added a few developmental players to add depth at the thin positions. They probably have even taken a  flyer on a skill position or two. The team is nearly fully constructed, but one pick remains for the Rams.

That is what makes the seventh round so much fun. It really reveals what the franchise is looking for and what they value. Here is a look at just that. 7th round draft options for the Los Angeles Rams.

The Rams will likely draft more than one defensive back in the 2021 draft. They lost John Johnson and Troy Hill in free agency and while the depth in the backfield is still solid, they are a few injuries away from being in hot water.

DJ Daniel is a gettable cornerback that has put up some great performances. What has hurt his draft stock is his recent injury that stifled his 2020 season with the Bulldogs. He only played sparingly in four games due to an ankle injury sustained before the start of the season. Daniel was held in high regard and had some good play to back it up when he was healthy in 2019. He had 42 tackles including two tackles for loss and eight passes defended.

Daniel has many favorable traits and is sufficiently athletic. He still needs polish and experience to become a starter but could see playing time in his rookie season. Troy Hill played the second-most snaps for the Rams defense with 972. At the moment, Darious Williams is the next in line to take more snaps and David Long will see a significant increase, as well.  The Rams would still have about 100 or so snaps for a rookie cornerback.

Daniel could fill that role. He impressed at the Senior Bowl. He was voted top cornerback on the American team. A roster that included several CB’s that are mocked to be picked ahead of Daniel, including his teammate Mark Webb.

Daniel didn’t blow anyone away at his pro day, but he did put on 10 pounds since last season. He weighed in at 195. His size and strength have been the question mark, but despite weighing more he posted a pitiful 11 reps on the bench press. That puts him in the bottom 30th percentile of cornerbacks per nflcombineresults.com. So those questions still remain.

Daniel has a solid base to work with and has a skill set that is ready to translate into the pro game and the Rams need that to back up Jalen Ramsey and Darious Williams.

ABTAL: Always Be Talking About Linemen. That will be the Rams mantra going forward until there is legitimate depth on this offensive line. Andrew Whitworth is 39, Rob Havenstein’s play has been inconsistent from year to year and the rest of the positions have been playing musical chairs over the last few seasons. Most importantly, Austin Blythe was signed by the Chiefs. Drafting Ryan Van Demark won’t end the search for more depth, but given the lack of, the Rams will need to explore all viable options.

Van Demark will need to develop his game more to make the team. His footwork needs to get quicker to block NFL speed rushers and he will need to become a more disciplined blocker, in general. The upside for Van Demark is he has proven that he is committed to improving his game. Coming into UConn he was a 2-star recruit, but quickly earned a starting job. He really nails the cerebral part of the game and has a great work ethic.

He has also been durable. Van Demark played 36 of 36 games over his first three years and would have done the same in 2020 had the Huskies’ season not been canceled. RVD is also a quintessential football player. When asked what he liked the most about playing offensive line, he said, “I like to hit people. There’s no better feeling than just staring at a guy and putting him into the ground.”

The 2020 season could have been his big breakout season. He would have been the lineman with the most experience with three of the starters departing at the end of the 2019 campaign. He was also named team captain for 2020.

Huskies Head Coach Randy Edsall said of Van Demark  “[He].. is a guy who’s really stepped up, and you saw him just take more of a leadership role on offense in totality. Also, he’s just gotten so much better from a fundamental and technique standpoint, and then also physically, he’s just a much bigger guy than what he was.”

Just how much bigger did he get? RVD put on almost 40 lbs in college, going from 264 to 302. What hasn’t changed is his height. He is 6’7” and like most tall linemen, he struggles if a defender is able to get leverage. Van Demark in particular has issues with this, but it’s hard to fault a guy for being big in a world of giants, and playing in LA might be the best place for him to land. Andrew Whitworth is listed a 6’7” 320lbs. Who better than him to teach the rookie how to handle an NFL defensive end.

Van Demark is most certainly a developmental pick, but with his work ethic and competitive spirit, he could earn a place on the roster and would be someone to watch for the next few seasons.

What we do know is this draft is stocked with good pass catchers and so was last year’s. What we don’t know is this what we can expect going forward or are we just in some sort of an anomalous talent boom. Either way, the Rams should grab while the getting is good.

Javon McKinley led Notre Dame in catches and yards and put up an impressive 17.1 yards per catch. Despite all that, it is seen as an underwhelming performance. 2020 was McKinley’s chance to be the man after Chase Claypool’s departure. Claypool’s shadow loomed large in South Bend. In 2019, he caught for over 1,000 yards and 13 touchdowns. While in 2020 Mckinley put up a respectable 717 yards, he only caught three touchdowns. All three touchdowns came in one game.

What really set the two apart was the consistency. Claypool consistently got open and was therefore a favorite target for Ian Book. McKinley on the other hand was streaky and, even worse, he seemed to disappear in some games and some of those games were the biggest games for the Irish. In Notre Dame’s final two games against Clemson and Alabama, he combined for five catches and 57 yards.

All that to say, McKinley will be available in the seventh round. What is impressive about McKinley and why he is a good fit for the Rams is his big-play ability and his combination of size and speed. A very interesting comparison that could be made given his size and pro-day results is Davante Adams.

Here’s the tale of the tape. McKinley vs. Adams

All pretty close and Adams ended up going in the second round and is now a premier NFL receiver. Of course, there is a very big reason for Adams’ draft slot. There was proof to go along with the pudding. Adams put up monster stats at Fresno State in both his freshman and sophomore seasons to the tune of 233 catches, 3,031 yards, and 38 touchdowns in 26 games.

McKinley is nowhere near as much of a finished product as Adams was going into the draft. He missed much of his first three seasons due to a foot injury and has only played in 16 games during all four years of his eligibility. He has seemed to put the injury concerns behind him, having played in eleven straight games without injury. But it does point out that he is still well behind where he should be in his development. Meaning he can get much much better under the wing of Sean McVay, Robert Woods, Cooper Kupp, and DeSean Jackson.

All in all, McKinley has a high ceiling and plenty of potential and the Rams have a soft palace for him to land. In the meantime, he can be a contributor on special teams and can be worked in as a blocking wideout or as sort of a bizarro version of DeSean Jackson. They are opposite in many ways but produce similar results.

Let us know what you think in the comments below or on Twitter, @LAFBNetwork. And be sure to checkout Rounds 2-6 here!

Total WRs drafted by the Rams this year - Powered By PickUp