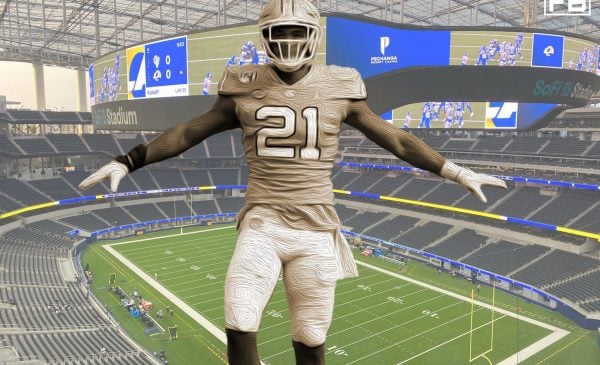 But not this year! Not when you talk about Quinn Meinerz. His rise into the national conversation has been so meteoric that he isn’t even on the radar of some of the most prominent mock drafters out there.

It isn’t a surprise that the big outlets haven’t caught on to Meinerz. Wisconsin-Whitewater isn’t even close to a powerhouse, nor is it one of those small schools that seems to have a strange ability to churn out unique talent. So overlooking this guy is normally exactly what should happen

Furthermore, UWW’s 2020 season was canceled. So, not only would Meinerz miss out on punctuating his college career’s final chapter and miss another year of development, but it would also mean his 2019 campaign would be the last impression of pro scouts.

The best summation of that season was inconsistent. He started off looking absolutely dominant, but by the end he was sloppy. This sloppy play was attributed to gaining a lot of bad weight. His technique took a hit, as well as his endurance.

Meinerz knew that without a season to prove that he could play at a high level, his dreams of making the NFL were narrowing. So he did what he could to prepare and improve himself. He teamed up with offensive line guru Duke Mayweather. He also took his body down to the studs. He went from 335 to 306, but he wasn’t finished. He put 14 lbs of good weight on and now enters the draft listed at 320 lbs.

All the hard work paid off. Meinerz received an invitation to the Senior Bowl and this is where the story turns the corner. Like other prospects from D-III schools, the top “weakness” levied against them is always some version of “inexperience against top-level competition.” Well, Meinerz was put up against top-level talent at the Senior Bowl and he imposed his will on every challenger. His draft stock went through the roof.

There is a belief that he may be available for the Rams in the third round, but as of right now, the Rams’ top need is center and Quinn Meinerz has the skills and size to be a starter in the NFL. He has met with the Rams twice and taken a phone call from new o-line coach, Kevin Carberry. And given the team’s financial strain, drafting a center rather than signing a free agent such as Austin Reiter or Ben Garland may be their best option.

He may just be the hipster draft pick, but he has some undeniable skills. He is also one of the biggest and longest centers in the draft. He is 6’3” 320 with an 81 3/8 inch wingspan and (according to his pro day) runs a 4.99 40. Most importantly he has shown a dedication to his development, a strong work ethic, and a strong desire to play at a high level. Anyone that wants to develop will develop under Coach McVay.

The Rams motto this offseason should be ABTAL, Always Be Talking About Linemen, because there’s plenty to talk about when it comes to the front five. So addressing a few of the biggest issues in the draft is necessary. Especially since Les Snead sees Matthew Stafford as the Rams QB for the foreseeable future.

The great news for the Rams is the offensive line draft class is deep and there will be good talent in the third round. The two-time All-American Buckeye, Wyatt Davis, is among those that will likely go in the third round and one that could compete for playing time next season if not become the starting guard for the Rams.

Wyatt Davis will be a steal in the third round. He still has some areas of his game to fine-tune, namely leaning too far forward, resulting in defenders getting underneath his pads. But these are minor issues. He lacks the ideal length for an interior lineman, but he is certainly big enough to play the position. Ultimately, injury concerns will keep him out of the first or second rounds. He had a nagging knee injury throughout 2020 and that injury knocked him out of the national championship game. Despite the issues, he was able to start 24 consecutive games.

All in all, Davis is a plug-and-play guard and would be an upgrade at the position for the Rams.

Unlike the other positions, linebacker doesn’t have anything to do with the Rams cap woes or free agency. The Rams just need more inside linebackers. Troy Reeder topped the group with a paltry 60.4 PFF rating. Micah Kiser and Kenny Young scored in the low 40’s and those were the starters. Travin Howard is likely to return from injury and the team believes Christian Rozeboom will enter the rotation. Drafting Chazz Surratt would finally give the Rams flexibility at the position and clarify the depth chart.

Given the state of the middle linebackers, he may not just add depth but might even be a starter. Surratt’s biggest knock is his lack of refinement. A big reason for that is he is still fairly new to the position, he joined the Tar Heels originally as a quarterback but asked to be moved to linebacker after struggling as a freshman. He will need to develop and do it on the double, but he would still be a good fit for the Rams and help them in significant ways.

One of his best abilities is his sideline to sideline speed. With the current ILBs, the Rams can be easily beat when stretched horizontally or with an earnest running attack. Also, with his speed and size, he is good in pass coverage. At 6’1” he can match up against a tight end like George Kittle but is also quick enough to hang with slot receivers and running backs.

Considering how desperate the Rams are at that position, Surratt will get significant playing time for the Rams regardless of his development. But with his body type and skill set, Surratt has the potential to have an incredibly high ceiling. It may be a big risk, but it could have a big reward.

Stevenson is an interesting prospect for the Rams for a few reasons. One, he is fast. He has legitimate sub 4.4 speed and he doesn’t slow much when changing directions. This alone sets him apart from the receivers the Rams have on their roster. With this speed and current skill level, he will give Matthew Stafford a play-making deep threat.

At Houston, he averaged 15.5 yards per catch and scored 22 touchdowns in 30 games. Not only was he a deep threat, but he also played inside in Houston’s Air Raid scheme. This sort of versatility would give the Rams a fun weapon to play with.

The other reason to draft Steveson is to improve on special teams. Nsimba Webster has been mediocre and every Rams fan cringed when Cooper Kupp put his tender joints on the line to field punts. The Rams were 20th in kickoff return DVOA and 31st in punt return DVOA. Stevenson returned three kicks for touchdowns and averaged 36.3 yards per return last season.

Stevenson isn’t without his downside. He isn’t a great route runner and he is undersized. He is 6’ 190 lbs, so he can easily get bullied off the ball. But he would add a spark on offense and on special teams.

Total WRs drafted by the Rams this year - Powered By PickUp

Michael Brockers’ departure leaves the Rams with some big shoes to fill. They will have to add a defensive end to the mix in free agency or early in the draft. The Rams have good depth at nose tackle, but adding a true 3-4 defensive end will give the line added speed on passing downs, as well as a developmental three-technique lineman.

Ta’Quon Graham fits the mold. He isn’t quite ready to be a starter but has the strength to hang with the pros. While development is needed, he has a high ceiling and has a lot more going for him than holding him back.

Most of his technique is solid. He has an explosive first step and gets the right leverage on his guy. He plays at full throttle on every down and can play several techniques on the defensive line. He also will come into the league with more experience than most rookies. At Texas he played in 48 games, starting exactly half of those games.

He becomes a 6th round option because he lacks the skills to be an elite edge rusher. But for the Rams at least, he won’t need to be that option. They need a quality backup and role player. Graham would be a great pick-up in the 6th round for the Rams.

Some may dispute the following claim. But it is on pretty good authority that Aaron Donald is, in fact, human. Some evidence for this claim was revealed in last season’s playoff games. Some of Donald’s human cartilage came dislodged from where it was supposed to be. This caused the very human response commonly referred to as pain. While Donald generally doesn’t feel pain, this pain caused him to play about half the amount of football he usually plays.

His absence was felt profoundly. The Rams managed only four pressures on Aaron Rodgers. The Rams averaged 9.2 pressures per game in the rest of 2020. The Rams’ lack of depth behind Donald was felt for essentially the first time. They haven’t had to think of what to do if Donald is injured because he just hasn’t been.

Knowing now that Donald is in fact not superman, the Rams need to start to consider depth and the future of the defensive line.

And that isn’t even considering the erosion of the d-line in the last few weeks. Morgan Fox signed in Carolina and Michael Brockers was traded to free up cap space. Meaning the Rams have even less depth today than they did when they couldn’t get pressure against Green Bay.

Mustafa Johnson is, most likely, not the heir apparent to pass rush supremacy. That’s not what the 7th round is for. But it’s a great place to add developmental depth and that’s what the Rams need the most in this draft, especially on defense.

Comparing Johnson to Donald is simply unfair to the young man, but the comparison is being made. When asked who he would compare him to Mel Tucker, Colorado’s former head coach said, “I was going to say Aaron Donald, but I can’t say, Aaron Donald.” It’s a comparison that Johnson doesn’t shy away from and he sees the similarities. Johnson says “Height and weight [wise], we’re about the same. He uses his hands to rush. That’s how I play — I try to keep guys’ hands off of me.

When put side by side the comparison isn’t analogous. Donald was much further along in his development than Johnson is at the same point in his career. Coming out of college, Donald was faster, stronger, and more agile than Johnson. That said, Johnson is one of the faster linemen in the draft. He had a strong showing at the Senior Bowl and also posted some impressive times during his pro day.

Because he still has work to do on his game and moreover, because he isn’t the prototypical size, Johnson will likely drop to the seventh round.

What do you think of this 7-Round Mock Draft Rams fans? Vote below and leave your opinion in the comments!