The Los Angeles Chargers finished with a league-worst 21 players on the injured reserve last season, but if they can stay healthy in 2017 they might have a chance to contend this season. The Chargers have not reached the playoffs since the 2013 season but new head coach Anthony Lynn seems to be the kind of coach who can keep it all together. But Los Angeles fans are unforgiving fans and care only about wins, losses, and championships, not cute slogans and free Philip Rivers jerseys for season ticket holders. The Chargers have to win in order to capture the support of the fans in Los Angeles.

Here are our predictions for the new season:

Mike McCoy, former head coach of the Chargers and current offensive coordinator for the Denver Broncos, faces his former team in a week one matchup. The Chargers gave a tough fight in Mile High last year, but they haven’t won there since 2013. It won’t change this year.

The Chargers play their first regular season game at the StubHub Center against an improved Dolphins team, who closely beat the Chargers at Qualcomm Stadium last season when Philip Rivers threw a late pick-six to linebacker Kiko Alonso. The Chargers do a better job of taking care of the football this year to even up their record.

The Chiefs swept the AFC West last year and haven’t lost to the Chargers since 2013. The Chargers have been a hard team to figure out the last few years but the defense, that has lost some key players this year to injury, will not be able to contain the power duo of Tyreek Hill and Kareem Hunt.

The Chargers will get their first look at Philadelphia’s 2016 first round pick, Carson Wentz. Running back Ryan Mathews, meanwhile, plays against his former team for the first time since moving on to the Eagles in free agency two years ago. Chargers defense will contain Wentz and Mathews for a close win.

Eli Manning faces the team he didn’t want to play for when he came out in the 2004 draft and a team he has never beat, sporting a 0-3 record against the Chargers. Running back Andre Williams will face his former team who released him during final roster cuts last season. Manning will continue the trend by adding another loss to the record.

The Chargers travel to Oakland to face the Raiders as ex-Chargers defensive coordinator John Pagano faces his former team for the first time since leaving. The resurgence of Derek Carr will spark an impressive offensive consisting of Amari Cooper, Michael Crabtree, and the recently acquired Marshawn Lynch.

The Broncos come to Los Angeles for the first time to face the Chargers. New Chargers offensive tackle Russell Okung faces his former team in the Broncos in his new much smaller home. The Broncos will once again have the Chargers number in a stronger contested game.

This Pre-Halloween game has the Chargers traveling to New England for the first time since 2011. The only scary things you’ll see in this game is Rivers and the Chargers trying to overcome the Patriots defense. The Patriots have an edge in this series as they have a 23-15-2 record against the Chargers.

Chargers defensive coordinator Gus Bradley faces his former team for the first time since he was fired after four seasons as Jacksonville’s head coach. The Chargers have owned Jacksonville in recent history, beating them six straight times. The Chargers will make it seven.

The Chargers travel to Dallas to play the Cowboys for the first time since 2009. Former Ohio State teammates and college roommates, Cowboys running back Ezekiel Elliott and Chargers defensive end Joey Bosa will face off on the field for the first time.

Yes. The Chargers lost to the Browns last season. Yes. Rivers threw for over 300 yards that game and still lost. No. The Chargers will not lose to the Brock Osweiler-less Browns team. Browns will continue their trend as the worst team in football.

The Chargers have not lost to the Redskins at home since 1986. Someone call up WWE because that’s one streak that won’t be broken. Rivers and Company will handle the Redskins once again.

The Kansas City Chiefs have had the Chargers’ number since the start of the 2014 season, beating them six straight times. Again the Chargers will not break this streak.

It’s a Christmas Miracle. Santa sends the Chargers back to MetLife Stadium for a Christmas Eve showdown with Jets. Center Matt Slauson faces his former team for the first time since joining the Chargers before last season.

Charger’s last chance to get a divisional win will come against the Raiders on New Year’s Eve. Raiders fans took over Qualcomm Stadium a year ago. Now the Chargers are in Los Angeles, but the Silver and Black will take over StubHub, thus making this a home game for the Raiders. Steven Haglund | Los Angeles Chargers | No Comments
In the next part of this series, we examine the ranking of all of the AFC West Secondaries. How do the Chargers stack up?

Jamal Madni | Featured, UCLA Bruins | No Comments
The UCLA Football program hasn't quite been the same since a letdown season in 2001. Is 2022 their chance to reclaim the city of LA? 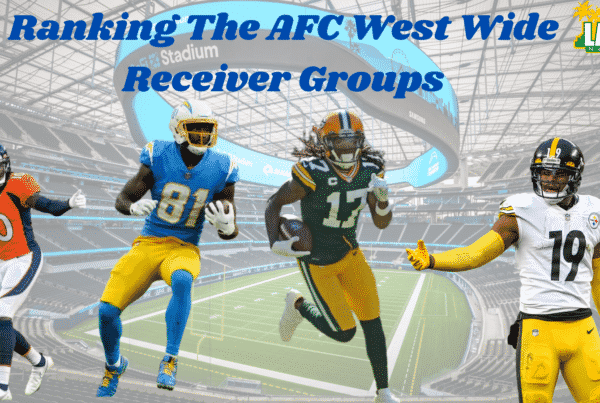