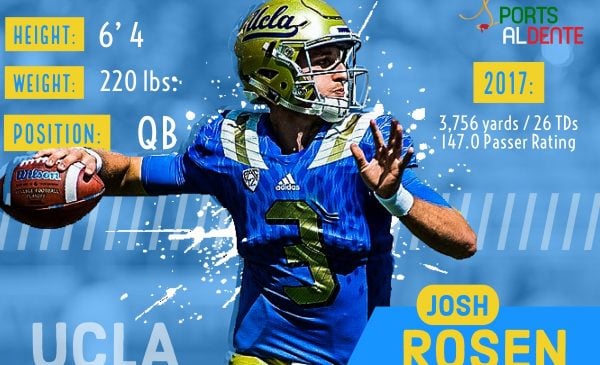 This year’s draft class is one of the most controversial in recent memory. Not necessarily because of character concerns but because the group is set apart by their different skill sets. It truly just depends on which attributes evaluators determine are the best. If you want a dynamic playmaker who needs some time to develop, then a player like Lamar Jackson is the player you’ll like the most. A player with a lot of upside with high bust potential? Look no further than Josh Allen.  A player that is a good mix of both? Sam Darnold is your guy.

The one who inexplicably seems to be slipping through the cracks is Josh Rosen. Rosen has arguably the most talent and is the best quarterback from a mental standpoint in the game. However, character concerns seem to be the main problem dragging him down in this year’s draft.

Some mocks have him as high as the first pick in the draft, while others have him dropping all the way to 15. The one thing that cannot be refuted is Rosen has the abilities of a good quarterback physically but his off-the-field attributes and sometimes questionable decision making are the things that make his draft stock suffer.

Rosen is the safest quarterback to take in this year’s class but ironically, the safest pick doesn’t always end up being the best move. It is this risk that has some considering Darnold or Allen above Rosen as they arguably have a higher ceiling despite their numerous risks compared to  Rosen. While character concerns are always valid given a position that naturally requires an emotional leader for the team. Rosen is without a doubt the most physically and NFL-ready quarterback in this year’s draft. If put in the right situation, he will prove his doubters wrong.

The best attribute a team wants from a quarterback is his accuracy. This is where Rosen thrives the most. His ability to hit receivers on short and medium routes is unmatched among the quarterback class this year. Rosen’s accuracy stems mostly from his trust in his protection and his ability to stand tall in the pocket to deliver the ball. He throws a tight spiral and produces more good results than bad.

His can fool defensive backs with pump fakes and utilizes his ability to throw consistently good strikes that end up in first down plays. It is another level to his eye manipulation that helps his accuracy by creating windows that he can get the ball through.

One of the most common negatives found in scouting reports for college quarterbacks is their footwork. Most college teams run simple offenses run mostly out of the shotgun to lessen the burden on their quarterback’s shoulders from a technical standpoint. Most of the time it’s a simple fix with an NFL coaching staff but already having good footwork coming out of college allows teams to shift attention to other areas of development.

Rosen is a natural athlete, as most quarterbacks are, but his footwork is above average. He also has more experience under center than most college quarterbacks do. He spent his entire college career under head coach Jim Mora running a pro-style offense that put Rosen under center and helped him learn good footwork from the get-go. This not only helps his deep accuracy but will ease the transition to the next level.

A main criticism of Tim Tebow when he was coming out of college was his accuracy and field vision, but a large part of his shortcomings were his mechanics. Tebow would throw the ball almost in a windmill-like fashion that opened up the potential risk for fumbles and had a significant impact on his accuracy. It’s one of the key reasons Jackson is such a hotly debated prospect this year. Jackson’s accuracy at times are good but his throwing mechanics are questionable.

While footwork can be easily taught in the NFL, breaking a quarterback of his throwing motion and the muscle memory there is one of the hardest challenges dealing with a rookie. Rosen’s mechanics are extremely sound and there is practically nothing needed to fix. As long as a team has or is willing to invest in its offensive line, it will enjoy Rosen’s success. He possesses all the traits that are normally hard for a college quarterback to learn when he gets to the pros.

If there is one thing that is preventing Rosen from being the undisputed best quarterback in this year’s draft class, it’s the concerns about his character. Rosen made headlines after his freshman year by putting a hot tub in his dorm room. While it was far from the worst thing a college quarterback has done, it did mark the beginning of some troubling patterns with Rosen’s personality.

Throughout his college career, the rumors of him being disliked by his teammates were well-known and while he made efforts during his final year at UCLA to improve that, the concerns remain nonetheless. He didn’t help his case when reports leaked in December that Rosen was trashing the Cleveland Browns and voiced his desire to play for anyone but them.

A source who works closely with college quarterbacks and is connected within the inside circle of college coaches told me his character is very concerning as a starter in the pros. He told me that he has concerns about how a strong personality like Rosen’s would fit in an NFL locker room.

This is without a doubt Rosen’s biggest question mark and has several teams very concerned with his passion and ability as a leader. Never a good sign when being evaluated for one of the biggest leadership roles in sports.

While Rosen played the entirety of his freshman season in 2015, his durability concerns stem mostly from a shoulder injury that cost him most of his sophomore season. In the same game that saw him pass for what was his then-career high 400 yards, Rosen went down against Arizona State with a shoulder injury that cost him the rest of the season. Normally this wouldn’t be a huge red flag but he was forced to leave a game this past season against Washington after suffering a concussion. He also reportedly tried to hide it from the coaching staff, furthering concerns about his character as that can seriously cost a team in the NFL. He missed the next game as well.

This will always be a massive concern for teams high in the draft as more often than not, their offensive lines are not always the best. So if a team wants to invest in a franchise quarterback, they want to make sure that investment can withstand physical and mental rigors of the NFL. While Rosen has shown he is resilient with the latter, the physical case of his struggles with preventing injuries will cause some teams, particularly teams like the Giants, to shy away from him.

On the note of teams high in the draft usually lacking good offensive lines, it’s particularly concerning how Rosen performs under pressure. While he stands tall in the pocket against the rush, displaying his toughness, it also plays into his durability concerns. Rosen will wait until the absolute last second to unload the pass and it increases the chance for injuries.

When he does decide to escape the pocket, Rosen only completed 42 percent of his passes. He is clearly at his best when he’s allowed to stand tall and stationary in the pocket. This plays into another big concern of his which is he forces far too many balls down the field as a result of overconfidence in his accuracy. This would be less of a problem if he was given more time to let the play develop. Rosen’s tendency to force passes usually occurs on plays when he is under duress. This might be a sign he is a fit for a West Coast offense that emphasizes quick passes.

Rosen finished his career at UCLA with 9,340 yards, 59 touchdowns and 26 interceptions which is the perfect indicator of his talent. His accuracy, footwork and mechanics are all NFL-ready. This is particularly impressive given that those attributes some of the most common areas to work on for young quarterbacks. While the character concerns are noticeable for a multitude of reasons, Rosen has shown a desire to change that about himself. By all reports, he interviewed well at the NFL Combine which should put some of those worries to rest. His durability, tendency to play hero-ball and ability under pressure still needs work. His negatives don’t come close to outweighing his positives. Rosen is the most NFL-ready quarterback in this year’s draft class and should he fall past the first overall pick, there is a good chance the Browns will regret passing over him.