Is Dorian Thompson-Robinson The QB That Gives The Bruins The Best Chance To Win In 2021? 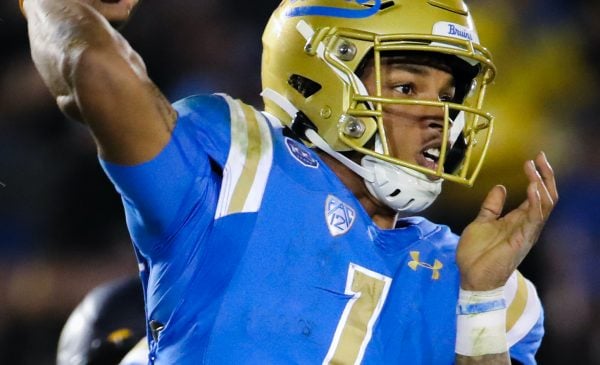 Time sure flies when it comes to College Football! It seems like just yesterday that Chip Kelly was taking over this team with the true freshman, Dorian Thompson-Robinson, at quarterback. Fast forward to today, and “DTR”, as he is often called, will now be entering his fourth and final year of College Football. He currently sits in a crowded quarterback room as the most experienced passer, by far, and he has been the starter for the Bruins for the majority of Kelly’s tenure at UCLA.

But does DTR give the Bruins the best chance to win moving forward? Or is it about time that Kelly moves in a different direction at the quarterback position?DTR has been a bit of an enigma at QB for the Bruins. He arrived at UCLA a highly touted recruit, a four-star prospect ranked as the second-best dual-threat QB in the country behind only Justin Fields in the 2018 class. But he also came to college largely inexperienced at the QB position. He spent the majority of his high school years playing wide receiver, only taking over full time at the QB position during his senior year.

This dichotomy of traits would continue for DTR as he played in college, ultimately making him a tough player to evaluate. The talent was evident: He had a strong arm, a quick release, was incredibly mobile and dangerous as a runner, and was capable of squeezing the ball into tight windows. But he also could be a poor decision-maker, had bad footwork, struggled with accuracy, lacked a good sense of timing and rhythm, and had a maddening tendency to run backward when pressured.

Up to this point, Chip Kelly has given DTR a fairly long leash at the position. Outside of Kelly’s debut game, DTR has always been the starter when healthy. However, he hasn’t always been healthy, which has given us a good look at what the Bruins offense looks like when DTR isn’t starting. Wilton Speight started multiple games in 2018, Austin Burton started a game in 2019, and Chase Griffin started multiple games in 2020. Those three QBs are different players with different levels of ability, but compared to DTR, the results tend to paint a similar picture. The offense lacked the explosion that DTR gave it when Speight/Burton/Griffin played, but they also tended to be better game managers with a better sense of timing and accuracy. Ultimately, it was a tradeoff.

I’ll be honest, I was not a fan of DTR early in his career, and I believe he got way too long a leash from Chip Kelly. My old pieces on the Bruins will say just as much. But there’s one thing you can’t deny looking back at DTR’s Bruins career up to this point, and it’s a great sign if you’re a UCLA fan. DTR has vastly improved as a starter every year up to this point.

His completion percentage jumped from 57.7% as a freshman to 59.7% as a sophomore to 65.2% as a junior. His adjusted yards per attempt jumped from 6.6 to 7.1 to 8.6. His passing efficiency rating jumped from 122.3 to 134.9 to 156.3. And his rushing yards per attempt went from a pitiful 1.4 to an equally pitiful 1.7 to an impressive 5.6. The bottom line is that as Kelly’s Bruins have improved overall each year, so has DTR. He essentially went from a bad QB to an ok QB to an actually pretty good QB. His biggest jump was last year, and that bodes well for him going into his fourth and final year as a Bruin.So now here’s the other factor in determining DTR’s prognosis for next year, and that is the other QBs in the room. Chip Kelly has a pretty crowded QB room, and it’s likely his most talented yet by a decent margin. It consists of the aforementioned DTR and four others: Chase Griffin, Kajiya Hollawayne, Parker McQuarrie, and Ethan Garbers.

Chase Griffin proved last year that he could step in and keep the ship running if need be. But he’s not particularly impressive physically or from a recruiting standpoint. He projects as a backup this coming year.

Kajiya Hollawayne is an incoming freshman, and surprisingly, the only other dual-threat QB on the roster besides DTR. Kelly has seemed to move toward pro-style QBs and passing concepts since his time in Philly, but if Kelly wants another dual-threat QB once DTR graduates, Hollawayne gives him that option. However, because of his youth and also relatively low recruiting ranking compared to 3 of the 4 other QBs on the roster, I would not classify him as a threat to DTR next year.

These next two guys are where it gets interesting, as they are both highly touted recruits. Parker McQuarrie is a guy I covered coming out of high school. A four-star prospect who committed to UCLA last year, he’s got some nice tools at the position and towers over the defense at 6’7”.

Then there’s Ethan Garbers, a surprising transfer this past offseason from the University of Washington. He’s a pretty damn impressive recruit considering what Kelly has been working with up to this point, one that should get Bruins fans awfully excited about what Chip Kelly can pull into this program moving forward. Garbers is the 4th ranked pro-style passer from the 2020 class behind only D.J. Uiagaleilei (Clemson), C.J. Stroud (Ohio State), and Harrison Bailey (Tennessee). Those are some pretty prestigious programs to be just behind, and it’s hard not to see Garbers as the future of this program.

So what does all that mean for DTR as the 2021 season approaches? It actually sets up an interesting dynamic whereas DTR is looking like the best quarterback he’s been in years, yet his leash may be shorter than it has been in the past solely in virtue of the other QB talent surrounding him, which is also the best it has been in years for Kelly.

At the end of the day, I would be relatively surprised (but not shocked) if DTR doesn’t start. He’s made it this far as a Bruin, he’s coming off a great year, and he has by far the most experience out of anyone in this group. Barring him getting ridiculously outplayed in spring, he should be the starter, and it’s fairly well earned up to this point.

But that doesn’t mean he’s a sure thing to finish the season. Thompson-Robinson is surrounded by talented guys who are going to want to play, and that will likely make Chip Kelly less likely to tolerate poor play from DTR, should the turnover bug start to bite him as it has in the past.

For now, it’s DTR’s job to lose, but the Bruins are in a good situation moving forward. It’s always better to have more QBs than fewer.