In a formal letter prepared for Thursday’s UC Regents meeting in San Diego, Kliavkoff articulated why UCLA leaving for the B1G was harmful 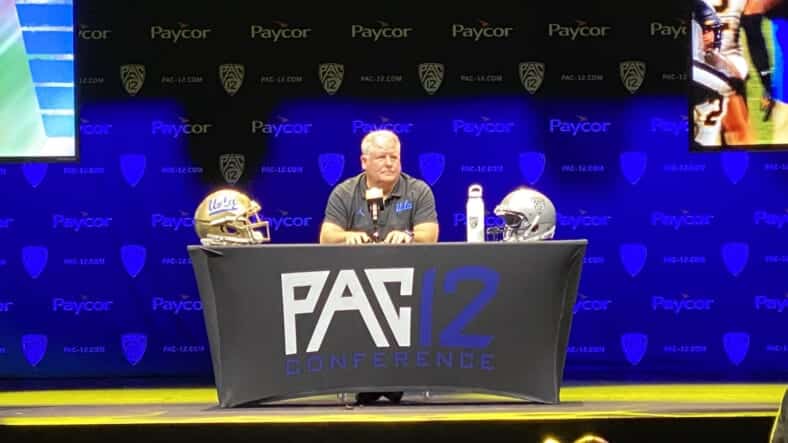 Boston College’s Doug Flutie shocking Miami at the Orange Bowl in 1984. Colorado’s Kordell Stewart stunning Michigan at the Big House in 1994. Closer to home, Arizona State’s Mike Bercovici numbing USC at the Coliseum in 2014. There’s no play in sports that captures the drama, brilliance, emotional volatility, or blinding finality as “The Hail Mary.”

It’s time to add PAC-12 commissioner George Kliavkoff to that illustrious list of proposed spoilers. In a formal letter prepared for Thursday’s UC Regents meeting in San Diego, Kliavkoff articulated why UCLA leaving for the B1G was harmful to its student athletes, alienating to its alumni, and detrimental to its operational outcomes within the UC system.

Unprecedented for a conference commissioner to take such a hands-on interest in the student-athletes of one university, Kliavkoff’s assessment was diabolical, delusional, and desperate.

But before we diagnose what the connotations and implications were, let’s break down the five-part specifics.

1. Significant Impact On Student-Athletes Physical And Mental Well-Being, Which Affects Both Academics And Athletics.

Notice Kliavkoff never stated the word “negative” before impact in this phrase to avoid liability. But beyond the legal technicalities, this argument seemingly based on travel impacts, is simply illogical.

Essentially, Kliavkoff is claiming that what amounts to one additional round trip to Europe over the course of one year is too physically and emotionally straining. This is for 18-22-year-olds in world-class physical condition that get an opportunity to build bonds, create lifelong memories, learn about different US cultures and socialize with their peers during extended road trips. A greater immersive education than anything they would receive in the classroom while they’re having the time of their lives playing a childhood passion.

2. Significant Hardship For The Families Of UCLA Student-Athletes And UCLA Alumni

This statement is directly and explicitly antithetical to reality. Going to the BIG-10 will enable UCLA student-athletes to be exposed to a wider geographic array of businesses as possible Name, Image, And Likeness (NIL) brand ambassadors. The quantity and quality of such endorsements will only financially benefit the families of Bruin student-athletes. Some in a profoundly significant manner such as the families of Dorian Thompson-Robinson, Chase Griffin, and Kam Brown.

Furthermore, 100,000 UCLA alumni live outside of California. Embodying the university’s emphasis on diversity, equity, and inclusion, a vaster national footprint for UCLA Athletics will enable a greater variety of Alumni to attend sporting events, feel reconnected to their university, and as a result, more compelled to donate towards the university’s endowment, which directly impacts the quality of education. All while the majority of California resident UCLA alumni get to enjoy the exact same quantity of UCLA Athletics home games.

The most significant impact on UCLA Athletics expenses has been its cumulative three-year $102M+ debt that the annual $100M BIG-10 media rights deal dissolves into spreadsheet ether. Even if we ignore that headline, Kliavkoff referenced that UCLA’s move to the B1G would send the athletics travel budget from $8.1M to $23.1M. He admitted this was a “back of the envelope” calculation, one that will undoubtedly need verification from a reputable financial auditor.

However, even if we accept Kliavkoff’s version of George W. Bush’s “fuzzy math,” that amounts to a $15M delta on travel expenses. However, the proposed new PAC-12 media rights deal was anticipated to be $35M while the BIG-10 deal was $100M. Thus, UCLA gains $65M while only hypothetically spending an additional $15M, resulting in a net GAIN of $50M to spend on coaches, facilities, and services.

Furthermore, the Regents had no intention of bailing UCLA out of their massive pre-existing debt and that was the impetus for reaching out to the B1G in the first place. Thus, the fiscal concern argument is falling on deaf ears.

4. Significant Negative Impact On Pac-12, And By Extension Cal, Revenues

This is the only section Kliavkoff got right. It destroys the PAC-12, which is irrelevant because no other UC school besides Cal resides in it. With regards to Cal, a 1991 referendum by the Regents provided university chancellors the authority to negotiate athletic contracts without systemic oversight, so Cal has no right, authority, or jurisdiction to be involved in this B1G deal.

The reality that Gavin Newsom and his donor base with deep Berkeley ties continue to consciously ignore is UCLA has no responsibility to Cal…legally, ethically, or systemically. UCLA has earned the right to be invited to the B1G and Cal has not. The Golden Bears have only themselves to blame for poor on-field performance, fan apathy, dilapidated facilities, eroding donor interest, and a lack of strategic institutional emphasis on athletics. Cal is having to sleep in the bed it has sloppily made for over half a century.

Mandating UCLA to bail out Cal is paramount to demanding the state provide more than 6% of UCLA’s operating budget. California is too broke and its hands too politically tied to do that.

This goes back to the travel argument, which we discussed is the football equivalent to 30 additional flying hours over 365 days. Having spent a decade at Boeing, that amount of additional flying time to the country’s carbon emission output is the equivalent of precisely one grain of sand relative to an entire beach.

Furthermore, UCLA has nearly 10X the number of faculty (7,790) as it does varsity athletes (820). As one of the world’s top research universities, Bruin faculty are overwhelmingly expected to publish, present, and give lectures at conferences, symposiums, and think tanks all over the world. The number of faculty members flying to different worldwide events on a daily basis is in the thousands. This has been the norm in academia for 50+ years.

Never during that time has the UC system regulated, mandated, or prevented faculty from disseminating knowledge due to excessive individual carbon footprint. This is because the UC goal is related to innovating on applied research breakthroughs that can be deployed at scale to solve the world’s sustainability challenges, not on solitary individuals going on an airplane strike.

Kliavkoff tipped his hand. This attempt to dictatorially force UCLA back to the PAC-12 after stating on media day that he’d strategically moved on indicates his inability to get any semblance of a decent media rights deal with the remaining non-LA-based conference members. Even with an upstart digital streaming platform without the sports media pedigree of a CBS, FOX, or ESPN. The writing is on the conference wall and Kliavkoff’s days are numbered.

Arizona, ASU, Utah, and Colorado are primed to be BIG-12 poached. It makes too much geographic, academic, and self-preservation sense for both sides.

Cal, Washington State, and Oregon State have the budgets, geographies, and brands that are much closer to the Mountain West than the PAC-12. They can subsequently grow at a consistent pace reasonably aligned to their resources.

Stanford, Oregon, and Washington are waiting for that next B1G call. But in the interim, the three of them can go independent and sign a short 2-3 year media rights deal with Amazon, Apple TV, Disney+, or Hulu. Given Stanford’s location to Silicon Valley and it being twice as wealthy as the rest of the PAC-12 combined, Washington’s linkage to Amazon and Microsoft in Seattle, and Oregon’s connection to Nike, there’s a very compelling joint venture media rights deal more in-line with tech startup terms and flexibility.

The leaps in logic within Kliavkoff’s proposal felt like the legitimacy of Seahawk Golden Tate’s reception against the Packers on that auspicious 2012 Monday night.