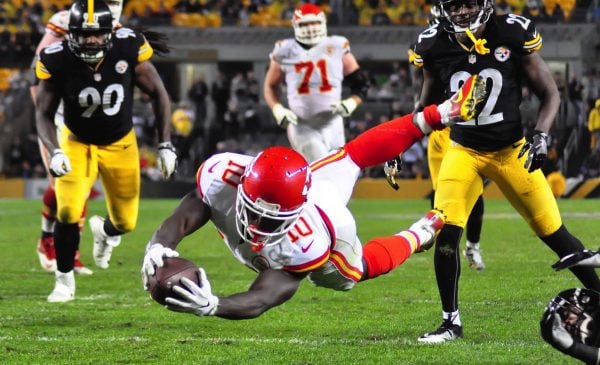 How’s it going LAFB Network fam?! I hope everyone is safe and excited about the 2020 NFL Season.

In today’s article, we are going to be previewing the Top 50 receivers that are going to be taken in your fantasy football draft. Make sure to bust out your pencils and highlighters because there’s going to be a lot of good info coming your way.

Thomas, Jones, and Adams are probably in a league of their own at this moment in time. Michael Thomas would be Tier 1, while Julio and Davante are more Tier 2.

This is the year that Godwin is supposed to have his breakout, but that was with the expectation that Jameis Winston was going to be the one airing it out to him. With Tom Brady now leading the team, Godwin might be a bit of a high risk / high reward gamble this season.

With a new system and a new team, Hopkins would also be considered a bit of a high risk / high reward option. There is no question he and Kyler Murray have the talent to take the team to new heights. I just don’t know if they will mesh as quickly as our fantasy hopes would like.

Between these three, Evans would be the player with a bit of hesitation to draft. As mentioned in Godwin’s review, Evans is going to have a new leader in the locker room so be cautious.

JuJu and Amari round out this Top 10 as the Bad Boys of the group. Smith-Schuster crippled many fantasy teams this past season and the same could be said about Cooper. Amari Cooper was definitely hit or miss last season. He had many games where he won you the week but that came at the cost of him not being on the field for a good amount of time.

Between Golladay and Kupp I think both players have great reliability. Golladay is a workhorse in the Detroit offense and Kupp is nothing but a target machine.

Robinson is still a hesitation pick for me personally. Mitchell Trubisky or Nick Foles haven’t really proved that they can carry a team on their shoulders but Robinson’s stats from last year prove otherwise. Allen Robinson ended up finishing 3rd among WRs in targets, behind only Michael Thomas and Julio Jones. These targets helped Robinson quite a bit though, he ended up finishing 8th last season for WRs in fantasy points.

D.J. Moore had quite the fantasy output last season. No matter the QB, Moore somehow found a way to get the job done. Admittedly he didn’t score a bunch of touchdowns last season, but that shouldn’t stop you from going for the Carolina receiver.

Some big decisions are going to be made between these three men. OBJ is coming back from his 1,000-yard season last year but playing him week to week was always a question. Ridley is the second man for the Falcons but will this year be the year where he tries to even the stats between he and Julio Jones? Keenan Allen has some big leaps and bounds to conquer this season with new QB Tyrod Taylor.

Last year’s rookie sensation at the back half of the season, A.J. Brown, claws his way as the top WR for the Titans’ offense. It was clear that he and Ryan Tannehill found some kind of momentum last year and we’re expecting him to do that again for the whole season.

DeVante Parker and Robert Woods finish our Top 20 but that shouldn’t phase you to look elsewhere in the draft. Parker and Ryan Fitzpatrick are picking up right where they left off last season and Woods still has a primary role in the Los Angeles Rams offense. Sure Cooper Kupp has a presence but there’s plenty of ball to go around.

In the case of Sutton, Lockett, Hilton, and McLaurin, I would say I am most interested in Lockett and Hilton. Lockett finds his way into the WR 2 conversation, while Hilton has a new face of the offense, Philip Rivers, now under center. We have seen Rivers keep WRs relevant with the Chargers so I would like to see T.Y. Hilton regain some relevancy.

Jarvis Landry had the shock and awe factor last year. He came and concurred, yet even with his explosive outcome, OBJ still stayed fantasy relevant. Both players were 1,000 receivers and that’s saying something with a hurt Odell. This season Odell is coming into the season with a fresh slate so expect Landry to have some regression.

This season I am super interested in both Green and Chark. A.J. Green has last season, and a few injuries, hindering his past, but that’s the past baby. Like OBJ, we’re coming back with a fresh slate which means good things for Green.

Chark had a breakout season last year that ended up being burnt out by an injury. Like A.J. Green, when on the field, Chark tore it up for his young QB Gardner Minshew. I think the Jags are going to be trailing a lot this season so Chark and Minshew might show some fantasy bursts again.

Metcalf, Gallup, and Boyd are each the young up-and-coming players for their teams. Metcalf is battling it out with Lockett, Gallup has Amari Cooper and now Ceedee Lamb to work with, and Tyler Boyd’s Bengals are getting A.J. Green back.

Amongst these men, I would prefer Gallup on my roster. The Cowboys have proved they can keep two fantasy-relevant WRs on their team, so give me that success. Metcalf is on more of a running team and Boyd has newcomer Burrow tossing him the ball.

Poor Julian Edelman. His main man Brady left him so now he has to try and mesh with new QB Cam Newton. Edelman used to be one of those players that would sit in the 3rd or 4th round but because of the changes to the Patriot offense, he is slowly sliding to the later rounds.

By all means, he is the same great player but we’ve never seen Newton produce as much as Brady has in the slant game, and that’s Edelman’s domain.

Each of these three players could easily finish as top 24 WRs at the end of the season. Diggs has the explosive kind of talent that might push the Bills over mediocrity. Crowder is a target magnet, so in any PPR format, he might be one of my sleepers I am looking for in the later rounds.

And Brown is just a young buck that is on one of the best rushing offenses in the league. He’s got the speed we all love, let’s hope Lamar Jackson just feeds him the rock.

This season I have a little bit of hope for Marvin Jones and Brandin Cooks. I project Jones to have only 10 fewer receptions than Kenny Golladay and Brandin Cooks has the opportunity to take the top spot for the Houston Texans.

Between Kirk, Tate, Johnson, and Shepard, I would prefer Diontae Johnson on my fantasy roster. Kirk has never been the big-play man in Arizona but he has been fairly consistent in his usage. Golden Tate is interesting because of the new heat Daniel Jones brings to the table but he will be sharing the load with Shepard, and the tight end Evan Engram.

That just leaves our man Diontae Johnson. Mr. Johnson is coming off an alright rookie year. But that’s with less than average QBs. Mason Rudolph and Devlin Hodges had there on and off success with Johnson and other WRs on the Steelers, but now its Big Ben time. Ben Roethlisberger kept JuJu and AB a deadly fantasy duo, so Johnson and JuJu might retake that mantle.

I want to believe that each of these players will find their way on our fantasy rosters somehow some way, but might be dropped in weeks. Preston Williams has to prove he can stay on the field after getting hurt last season but that’s with the Parker and Fitzmagic blending.

Will Fuller is nothing but a doctor’s note waiting to happen and John Brown, seemingly overnight, was replaced by Stefon Diggs. Hopefully, the relationship between Josh Allen and Brown had some kind of tangibility in it or Brown may find himself living on the waiver wire.

This season will be Sanders’ third team in two years. The once fantasy relevant WR quickly found his way to being the WR2 for the Saints. We know Thomas is going to get fed so don’t rely on Sanders the vet.

The recently drafted Henry Ruggs pulled a Cinderella story on the Las Vegas Raiders roster. Tyrell Williams is missing from this projection list and that’s because he landed on the IR for the season, Therefore, Ruggs might be the WR1 for Derek Carr and the Raiders.

Slayton and Miller are some sleeper WRs that I enjoy this season. Slayton might have shown some kind of likeness to Daniel Jones, and Anthony Miller is the number two man for the Bears. Miller can easily leap tiers in the rankings if he is utilized more like Allen Robinson.

I touched on CeeDee Lamb with both Amari Cooper and Michael Gallup. He is in the right offense to succeed, he just needs to see the light of day.

We finish the projections with a couple of WRs that found new homes this season. Perriman took Robby Anderson’s spot in the New York Jets offense, but will he pan out? Jamison Crowder already has his homestead on the team so we’re going to have to see how much Perriman is a part of the offensive scheme.

Robby Anderson joins D.J. Moore and Curtis Samuel on the Carolina Panthers this season and that kind of feels like we’re trying to force it. The only reason Samuel’s not on this list is because Anderson has the reputation to be the hot-wheel on the team so Samuel is pushed further into the Panthers loaded offense.