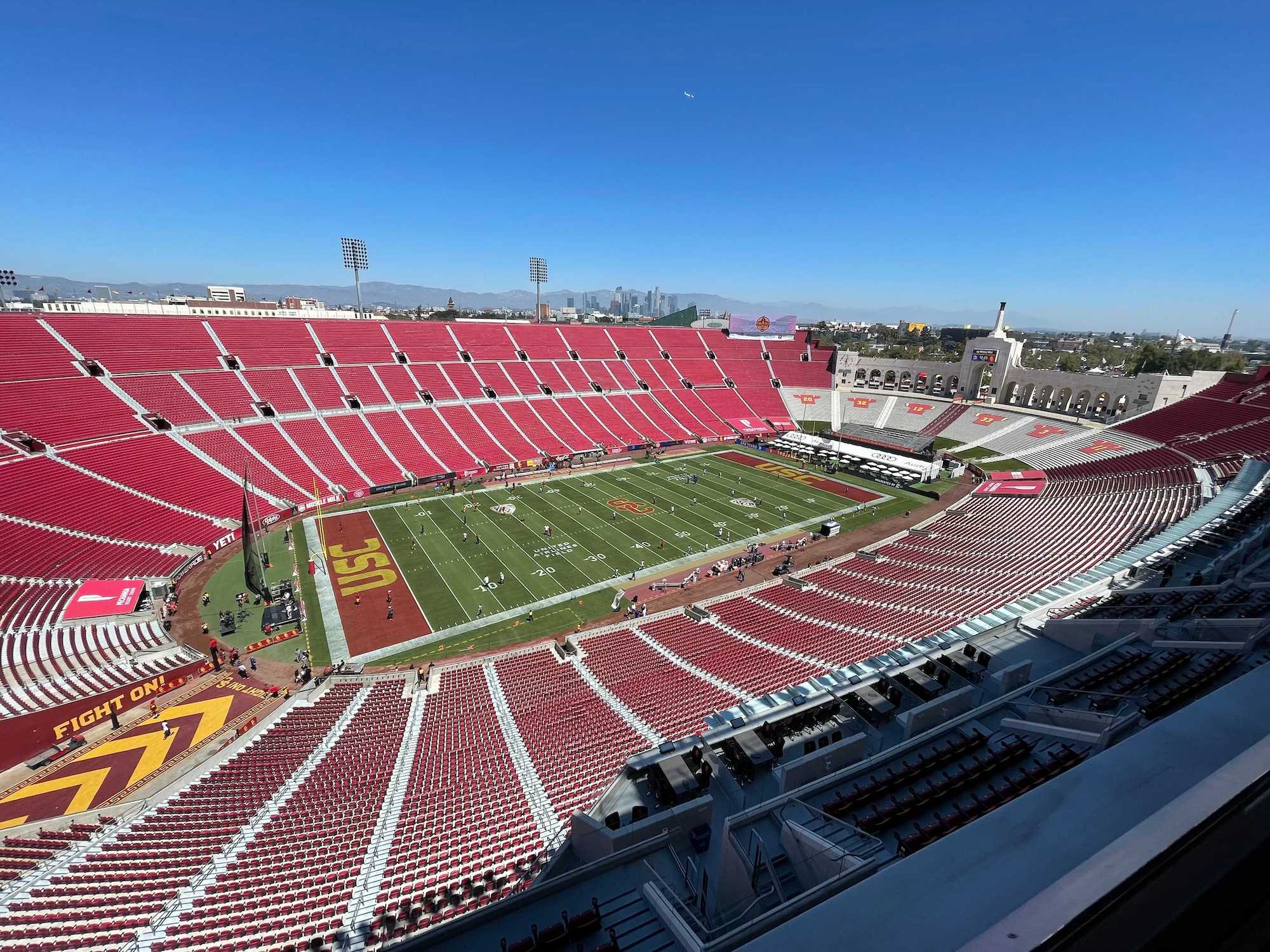 USC Trojans Travel To Cal For Final Game Of Season

The USC Trojans season is pretty much over and would’ve been over if it wasn’t for the postponement of their game against Cal on Nov. 13, but the players in both programs will still get a chance to duke it out in the final game of their season — a day after the Pac-12 crowns the champion.

Cal Berkeley and USC (4-7, 3-5) have had the same kind of season — but in different circumstances.

While Cal will finish the season and prepare for next season, USC is going in a completely different direction after making official the hiring of former Oklahoma head coach Lincoln Riley on Nov. 28.

Riley is regarded as one of the brightest young minds in college football, an offensive guru, and a great recruiter of high school and transfer players.

He watched the Trojans’ practices on Tuesday and Wednesday with his staff that followed him from Oklahoma — defensive coordinator Alex Grinch, receivers coach Dennis Simmons, strength coach Bennie Wylie, and director of football operations Clarke Stroud.

Interim head coach Donte Williams is preparing the team for their final game — but it might also be the last time he’s a part of the Trojans program.

“Right now, my main focus is all about Cal and only Cal — I’ll focus on everything else after this particular ball game,” he said to the media after Tuesday’s practice. “I haven’t even asked about [the future] — I do not want to be informed. All I care about right now is making sure we handle Cal.”

This final Pac-12 matchup should be a high-scoring game.

Williams spoke to the media Thursday in his final appearance as the interim head coach, and he reiterated that they are continuing to prepare for their matchup on Saturday against Cal, who will likely show multiple sets on offense and a tough defense that will be ready to go.

If both teams take this game seriously, it should be fun to watch. If they treat it like a scrimmage or a game without any benefits, it’s going to be boring.

USC fans might as well just look past the game and look towards next season.

The new coaching staff has a rare opportunity this week — they get to see the team at a real practice preparing for a real game. Then, win or lose, it’s time for them to get to work on recruiting and building on the team they will have next season.

“Certainly getting the right staff in here is a key priority,” Riley said Tuesday during an appearance on The Herd with Colin Cowherd. “There’s going to be certain steps that we’re going to have to take that are going to take time — it’s not going to happen overnight — but at the same time, as you mentioned, there are opportunities to rebuild, add, and change rosters. There are more opportunities to do that than ever before. There are so many different ways that you can go about it, so I think a big part is having a staff that can be creative, that can look at [the personnel and say] here’s where the roster is in a great place, here’s where we need to add, here’s where we need to change and adapt — and again, I think once all the future recruits and future SC players out there see what we’ve seen — the commitment and what this place is getting ready to do in terms of going completely all-in on this football program… And so I think when all of these people see what we saw, I think we’ll have some great opportunities to have some great Trojans.”

Williams was asked what he’s learned about himself going into the 10th week as the interim head coach, and he went into how tough it is and the circumstances a team goes through.

“I mean, you learn a lot, but every week, I learn something new,” he said Thursday. “Trust is a big thing, morale is a big thing — I mean, just making sure that you’re a part of a team. And it’s a lot bigger than wins and losses. Everyone sees the wins and losses as to how you judge someone — and, you know, this is a sport where that’s where you get judged off of. You know, you do the process every week and you get judged on what happens on Saturday. They don’t see the other things that go into it… I mean, it’s so much that I can say I learned over this process that I can almost write a book on, but the biggest thing, once again, is you can look back on so many things, but today, I’m all about what I’m going to do on Thursday to make sure this team is prepared for Friday, to make sure they’re prepared on Saturday and to make sure we do everything for Cal.”

USC is coming off an intriguing performance at the L.A. Memorial Coliseum in their game against BYU on Nov. 27 where they had about four minutes left in the game and a chance to march down the field and beat BYU.

The game is scheduled for an 8 p.m. kickoff and will be televised on FS1.