USC Steam Rolls The Buffs: Game By The Numbers

On the ever-so-rare Friday Night Pac 12 bout, the USC Trojans hosted the Colorado Buffs who are definitely in a rebuilding year coming into the game 1-8. 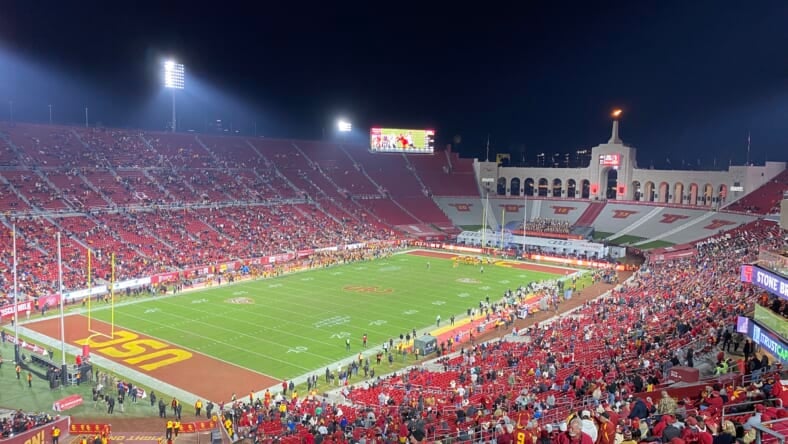 On the ever-so-rare Friday Night Pac 12 bout, the USC Trojans hosted the Colorado Buffs who are definitely in a rebuilding year coming into the game 1-8. USC took a few drives to find their footing but when they did it was all she wrote.

The now 9-1 Trojans took advantage of this young defense and ended up beating Colorado 55-17. So now all USC can do is win out and hope the committee chooses USC if they make it to, and win, the PAC 12 championship.

With Oregon and UCLA losing it makes the road a little tougher but it’s out of their hands and can only focus on winning out.

Typically, when you see 55 points, you’re thinking the QB had some insane numbers. Well for this game that really wasn’t the case.

Caleb Williams ended the night with only 268 passing yards three touchdowns and one interception. He was without Mario Williams, and Jordan Addison was only on the field for a few plays and logged only one reception for 2 yards.

So without his top two targets, Williams spread the ball around to nine different receivers. Kyle Ford and Brenden Rice both had a few receptions for around 70 yards so it was a real team effort rather than one player taking over.

Austin Jones, Raleek Brown, and Darwin Barlow also got work out of the backfield with each having two or more receptions.

It seems like Lincoln Riley is trying to keep Williams and Addison healthy going into these next two games against UCLA and Notre Dame.

A big shoutout to the Trojan Defense who stepped up big time not allowing the usual four or five huge plays that keep teams in the game. Aside from a few big runs by Colorado’s RB Alex Fontenot, USC played the run extremely well holding him to just around 108 yards on the ground. This is a big win because the defense for USC has been the reason a majority of these teams stay in the game and actually have a shot at winning.

However, it looks like Alex Grinch and this unit are hitting their stride late in the year. The Trojans only allowed 124 yards passing and 135 on the ground, which is huge progress considering its double most games. Better late than never considering the next two games will be the toughest by far, and this score points to offset getting scored on will not work on the Bruins and Fighting Irish.

The Trojans suffered a huge loss with Senior Running back Travis Dye going down with a season-ending ankle injury. Dye was an integral part of this offense that helped bring balance and a veteran presence in that backfield.

Austin Jones will likely be the lead back along with Freshman Raleek Brown and Junior Darwin Barlow. These three running backs are all a little different which will pay off trying to replace Dye as much as possible to keep defenses off balance down this stretch.

Austin Jones transferred from Stanford and was sharing the load with Dye to begin the year, and Raleek Brown is uber-explosive and can break a big one at any moment.

The one back that will have the most impact is Junior Darwin Barlow who fans got to see last year carry the ball with the committee under the previous regime. Barlow is your more typical bruiser bigger back who will help late in games when you need two or three yards for a first down. With these backs, the production won’t be the same, however, the Offense can keep pace if there are no hiccups.