The UCLA Bruins hosted the Bowling Green Falcons at the Rose Bowl on Saturday afternoon. Jamal Madni analyzes the keys from the game. 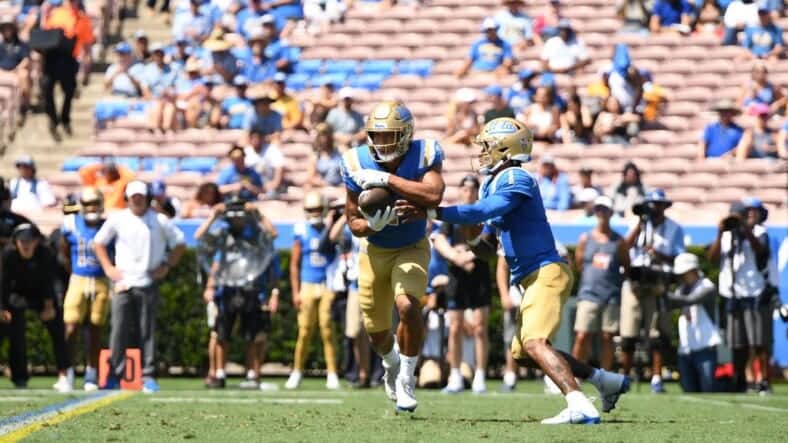 The journey back to Pasadena New Year’s Day began with a first step Saturday. In front of an optical illusion like Rose Bowl crowd of 27,143, it was a tale of two games for the Bruins.

The game’s first 16 minutes consisted of UCLA miscues all over the field: a blocked punt, muffed punt return, and interception en route to a stunning 17-7 deficit for the 23.5-point Mighty Bruin favorites.

But order was restored under the scorching San Gabriel Valley sun as the Bruins scored 38 unanswered points in the game’s final 44 minutes.

Yet the Falcons of Bowling Green exposed more questions than conceded answers for the 1-0 Bruins heading into next week.

The Offensive Line Was Offensive

The discussion must commence with the unit that lost three starters from a year ago, and it showed. A plethora of holding, illegal downfield, and false start penalties play undercard to the unit’s fundamental struggle with pass and run blocking. It was evident that Dorian Thompson-Robinson would be running for his life early and often, including the improvisational brilliance he displayed with a spectacular 68-yard touchdown scramble that was UCLA’s first score of 2022.

The 626 total yards should not be any consolation for Bruin fans as Chip Kelly recognized the offensive line’s deficiency and eliminated the vertical passing game from the equation. DTR went 32/43 for 298 yards, which translates to a meager 9.3 yards per completion and only 6.9 yards per attempt.

DTR was exclusively in checkdown and bubble-screen mode to get the ball out as quickly as possible. Even the game’s other spectacular Bruin score: the Keegan Jones 52-yard touchdown reception was the product of a DTR pass in the flat on the cusp of getting sacked.

In fact, DTR only completed two passes (both to Jake Bobo), while getting intercepted once, where the ball was in the air for 10+ yards. While the promised emergence of Kazmeir Allen as a go-to guy with 13 targets and 10 receptions was a welcome sight, his 8.5 yards per reception was way down from his 15 yards per reception in 2021. A direct by-product of Kelly’s inability to dial anything up for down-the-field shots due to the deficiencies in the trenches.

The run blocking didn’t fair much better as even though Zach Charbonnet looked like his physically dominating self repeatedly shedding would-be tacklers, his 111 yards came on a more-than-expected 21 carries. A 5.3 yards per carry, while excellent against Power 5 competition, is far too low for a true contender versus a team that went 4-8 in the MAC last year. Furthermore, Charbonnet’s longest run was only 16 yards, as the offensive line was incapable of physically imposing its will to enable Charbonnet from consistently escaping in-the-box containment.

In a game like this against lesser competition, it’s not about if you score, it’s about how you score. True dominance is being able to experiment with multiple personnel and packages, all of which will be effective, to explore which is most emphatic. Kelly couldn’t do enough exploration Saturday because of inherent offensive line shortcomings.

The juxtaposition to the offensive line was last year’s much-maligned defensive unit. If we remove the punt block for a touchdown and Bobo’s muffed-punt at the Bruin’s own 11-yard line that set up a Bowling Green field goal, the defense only gave up seven points. In fact, the front seven was particularly dominant as Bowling Green only had 162 total yards on a poultry 2.3 yards per play.

Murphy was as disruptive as an 11-year-old on a sugar kick, with one sack, 1.5 tackles for loss, and constant hounding on Falcon QB Matt McDonald.

Not to be outdone as a pass rusher was Jones Jr., who had two tackles for loss and seemingly hired a realtor to buy real estate in the Falcon backfield. Muasau teased us with flashes of horizontal range and his innate swarming to the ball instincts with 3 solo tackles and 0.5 tackles for loss. While Kirkwood looked like a championship volleyball player with two technical textbook, NFL-like pass breakups.

The Bruin defense did everything we cautiously hoped, secretly expected, and were surprisingly pleased it would do – eliminate any doubt Bowling Green would have of an upset with overwhelming, consistent dominance at the line of scrimmage. The defense looked confident, calm, and self-assured from months of preparation and a simplified approach. It’s only week one, but kudos to you, Bill McGovern.

It’s evident one game into the season that Bobo doesn’t have the frame, instincts, or mindset to be an elite returner. His muffed punt, two returns of one yard each, and getting brutally t-boned by a pair of Falcons due to an exceptionally late raising of the hands for a fair catch, should be enough data points for Kelly to make a change in week two.

The blocked punt was yet more evidence of poor offensive line play, rather than inferior special teams’ schematics. Yet the most concerning element of the Bruins special teams’ gaffe buffet was Nicholas Barr-Mira missing two field goals, of 28 and 44 yards, respectively. Against PAC-12 competition, the Bruins will need to rely on a rock-solid kicking game, so it’ll be noteworthy to see Barr-Mira continue to improve in the weeks to come. The Bruins can’t go into in-conference offensive drives with the pressure of touchdown-or-bust expectations.

Always better to learn from a win, but these 1-0 Bruins are still very much a work-in-progress, which is a bit of a disappointing diagnosis given the immense experience returning at the coaching and quarterback positions. Good thing it’s two more stops on the greatest hits cupcake tour before the season truly begins.