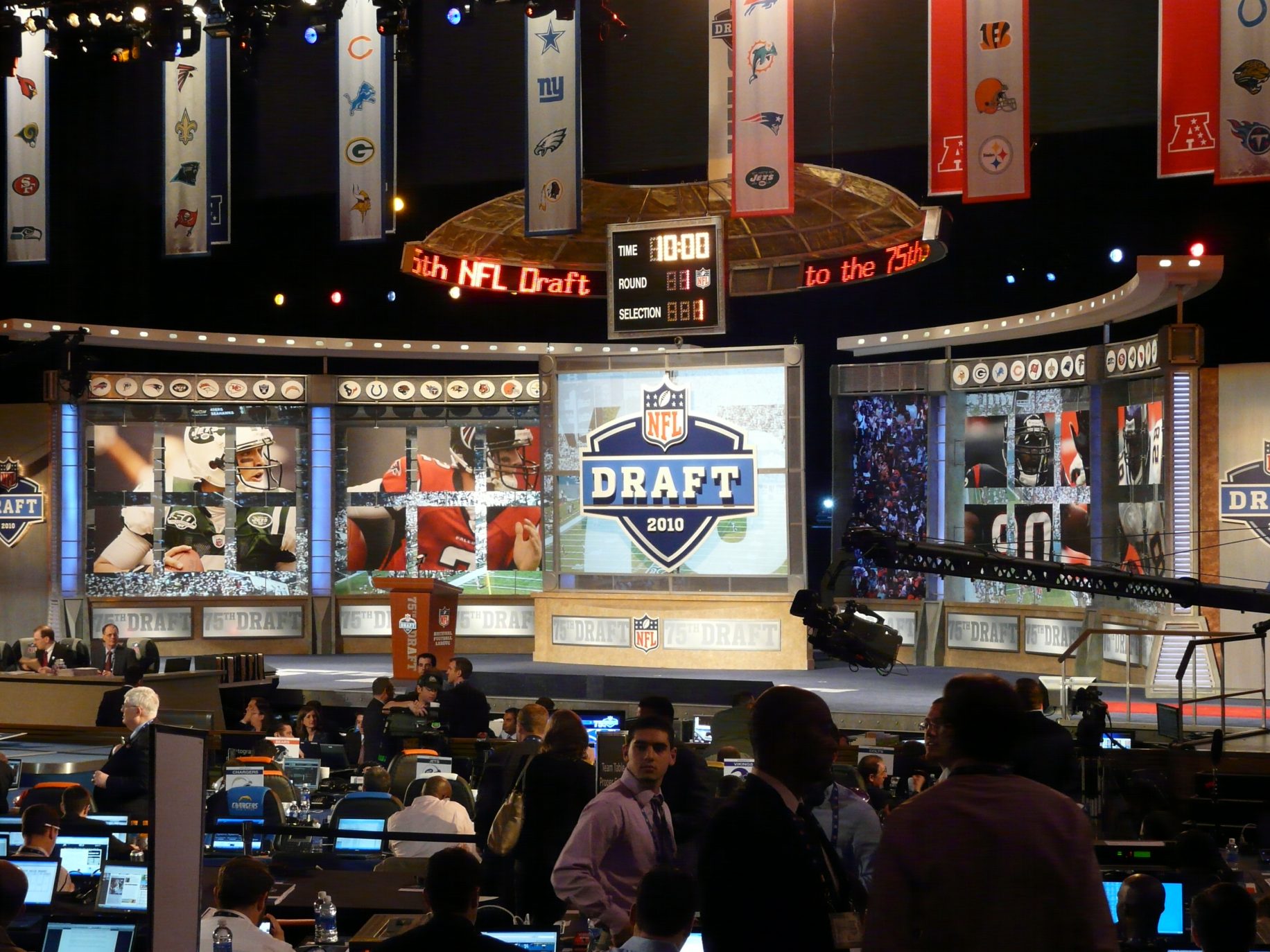 In looking back at the Rams draft choices throughout the 2010s one can easily draw a throughline between why they were hitting rock bottom and yet sinking way lower, and why their fortunes turned around so quickly. Yes, coaching and free agency signings played a large role too but none of those things matter if the cupboard is bare and the foundation is sinking. That might seem obvious, but a team can survive bad drafts if they have a great coach and or quarterback, i.e. the Patriots, but more often than not a team needs to hit some home runs. For the first half of the 2010s, the Rams told the rest of the league they were bunting, and in the second half of the Rams draft history, they started hitting home runs.

A lot of ink both real and digital has been spilled about how bad this pick was. He was routinely injured and when he was healthy, he wasn’t able to offer much more than check downs. That said, the man became the last number one pick in the old system and made bank. He was one of the last straws that broke the CBA’s back and created the rookie salary scale we see today. Bradford was not (nor was he ever) a franchise quarterback but he made a lot of money convincing people he could be.

2011: At Least The Defense Looks Good

Josh McDaniels was brought in to fix the offense so the Rams draft strategy was to begin rebuilding the defense. Chris Long needed help and in came Quinn. Quinn was dynamic until injuries and an ill-timed extension got him traded.

Honestly, everyone taken after Quinn would be considered a bust. Kendricks was the highest of those picks so by default he’s the biggest bust. He never became the safety valve, Sam Bradford, desperately needed and other teams took a chance on him but he’s yet to materialize into anything. Austin Pettis and Greg Salas never became quality wide receivers either so there’s that.

Les Snead’s first draft would set the tone for his entire tenure to date. He found a sucker in Washington to trade him a principal’s ransom in picks in order to draft Robert Griffin III, who burned bright and then burned Mike Shanahan. This was the first decent draft they’d have in a long time but there was still more darkness to come.

The Rams draft once again reflected a desire to build the defense which makes sense since they hired defensive-minded (and only defensive-minded) Jeff Fisher. Michael Brockers is still with the team after almost going to Baltimore. He’s been a key cog in the Rams defensive resurgence and hopefully remains so.

The 2012 draft had several receivers worth taking such as T.Y. Hilton and Alshon Jeffery but of course, the Rams opted for Brian Quick. Oops. With one of their other second-round picks, they took running back Isaiah Pead who never became the complement to Steven Jackson.

Greg the Leg was the best kicker they’d had since Jeff Wilkins. He had his share of down moments but the Rams didn’t have to worry about going for it on 4th down because he could kick it from way out. It’s too bad he got too expensive to keep.

In 2012, Snead gambled and scored from the RGIII trade, and a year later he’d truly feel himself and it didn’t turn out well.

T.J. McDonald was a solid safety before leaving for greener pastures in Philly. He was taken in round-three which also made him a steal.

Whiffing once in the first-round is rough but twice is a whole other level of sad. The Rams draft gave them two firsts and they traded up to give their offense a boost. That boost was for a player that the internet and teams still won’t give up on (he’s currently meeting with the Niners). He was always a poor man’s Percy Harvin and even McVay couldn’t make him better than a guy who has one, maybe two highlights a year. Ogletree on the other hand was always an athlete in search of a position. It’s still weird Snead extended him.

It’s still INSANE that Donald made it to the 14th pick but the pride of Pittsburgh and the human Kaiju is without question the Rams best draft pick since Torry Holt. Donald is a once in a generation player and still has room to grow.

The Rams had the second overall pick that year and instead of picking Khalil Mack (can you IMAGINE?), Mike Evans, Odell Beckham Jr., or Taylor Lewan they landed on Greg Robinson. Robinson has had several chances to turn into something and it never happened. OOOF.

Joyner’s impact wouldn’t be felt for a few years but he started out as a corner and out of necessity converted to safety. He helped mold future value pick John Johnson to become a necessary piece of the defense. He never became an All-Pro caliber safety but he was a great piece to have and the Raiders would end up paying him like one.

This was the turning point in the Rams draft success. Yes, they were still in their proverbial winter but the ice was beginning to thaw. Les Snead would begin his streak of hitting multiple home runs in a draft and begin building something, even if it wasn’t clear at the moment.

It seemed strange that with the 10th overall pick, the Rams draft strategy would involve taking a running back. Gurley’s pre-draft knee issues would eventually come to haunt him but without him, the Rams resurgence does not happen. He became their most dynamic player since prime Steven Jackson and made the Rams watchable.

The Rams were still trying to find the next Orlando Pace or at least someone who could block. Jamon Brown wasn’t that player for the Rams or anyone else for that matter. Luckily he wasn’t the only tackle taken in that round.

Despite a shaky 2019, Havenstein remains a foundational player on the Rams line. He is a key cog in their offensive line and would be extended because the Rams believe he’s their future. Now, that could all change but he’s still been a big reason why the offense turned around.

2016: The Actual Prince That Was Promised

Snead did what many mocked Washington for (and Snead benefited from) in trading a Danish for a doorknob. That decision is still a matter of contention but for the first time since Kurt Warner, they found themselves a franchise quarterback. It would just take a little while to realize it.

Higbee has become the main tight end in Sean McVay‘s offense. He got the extension Gerald Everett isn’t going to get and has proven to be a clutch player when needed.

2017 was the first year of Sean McVay’s tenure and the team’s only priorities were to get Jared Goff weapons and to rebuild him from the ground up. The Rams draft that year left them without a first-round pick but that didn’t matter. Snead hit some major home runs in this draft and did so in the later rounds.

Kupp is one of Goff’s key weapons and one of the best possession receivers in the game. His absence was felt during the Super Bowl run when they needed a deep threat and no one could fill the void. He’s their second-biggest priority after Jalen Ramsey this next off-season.

The Rams needed help on defense and who knew they’d stumble into one of the best young safeties in the league. He’s gotten better and better each and every year. The fact that they found him in the fourth round is a miracle.

For once, the Rams draft strategy wasn’t coming from a place of desperation but of success. They started extending some key cogs (which mostly would bite them later) and traded their first-round pick for Brandin Cooks (it worked until it didn’t). Still, despite not having that pick, Snead found a lot of value.

This is difficult to pick since the draft wasn’t very long ago. SJD however, is on the cusp of being a key cog on the Rams defensive line. He’s gotten better each year and he is poised for a breakout.

SJD’s place was once thought to belong to Myers. Myers had a sack in the Super Bowl and was beginning to emerge as someone to watch. Then the Rams decided to cut him in camp and he never made any major impact with the Jets who picked him up immediately.

Kiser is going to be a starting linebacker this season. He has had moments that have demonstrated he is worthy of playing in the NFL. This is the season where he proves he can start.

The Super Bowl wasn’t the best showing for McVay, and Snead realized that he might have made some mistakes along the way. They were going to reload while trying to figure out the extent of those mistakes.

Eric Weddle was supposed to help the defensive backfield transition into the John Johnson era. That didn’t come to pass but they found both a valuable starter in Rapp and someone who could either be part of the tandem or take over for Johnson should the Rams be unable to keep him.

The Rams offensive line struggled last year with injuries and poor play. That gave these two late-round picks a chance to not only fill in but to become borderline starters. Evans is competing with Havenstein, and Edwards is probably going to start at guard.

The Rams lost their first-rounder after trading for Ramsey so yet again McVay is without a pick in round one. That’s okay because Snead once again seemed to find value in the later rounds. It isn’t clear who the best value or the best pick is just yet. The Rams draft strategy was to pick potential replacements when their salary cap reckoning happens next year.

It’s been a wild decade for the Rams draft prospects. They came away with a generational player in Donald, some solid starters, and yes some major whiffs. They gamble a lot and treat first-round picks like they’re meaningless, but they still have found a way to contend the latter half of the decade.