The Rams came into Week 2 heavily favored over the Atlanta Falcons. They met a scrappy team that pushed them to the limit. 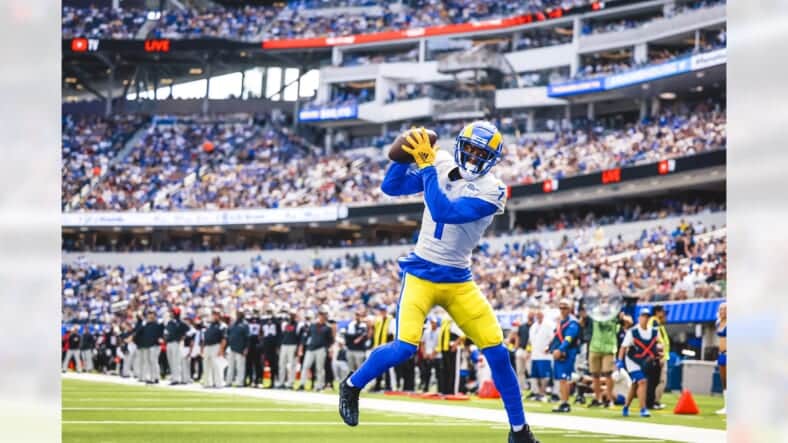 The Rams benefit from the Falcons’ self-inflicted wounds.

All the questions from the previous week about Allen Robinson, Sean McVay, and Matthew Stafford looked answered against the Falcons. The offense looked unstoppable. They moved the ball with impunity. They only attempted two punts all game. (Technically) They were up 25 points at one point in the 3rd quarter. Truly firing on all cylinders, for most of the game.

In the first half, the Rams defense bent, giving up big yards on three deep passes from Marcus Mariota. One was a 39-yard pass to KhaDarel Hodge. For the other two, the Rams defense ceded yards because of defensive pass interference calls. 56 yards in total. More importantly, one of those penalties resulted in the overturning of a Troy Hill interception.

But the Rams defense didn’t break. They stopped the run and contained the twin towers of Kyle Pitts and Drake London. Most importantly they held the Falcons to just three points on their two trips inside the Rams 20-yard line in the first half.

That’s where Atlanta committed their self-inflicted wounds. On their first trip, there was a holding penalty, then they gave up a sack, then the Falcons placekicker, Younghoe Koo, missed from 44 yards. The next Falcons trip played out similarly, with pressure on Mariota, and a holding penalty, but this time Koo scored the only points of the first half for the Falcons.

That first half also saw Cordarrelle Patterson bobble a pass that was intercepted and a failed 4th down conversion attempt with a very predictable call; a run up the middle.

The Rams left the first half looking like the team they should look like. The Rams were a 10-point favorite coming into their game against the Falcons. And it looked like they were well on their way to winning and covering that spread and more. The offense continued to look unstoppable going into the second half, adding a touchdown right off halftime. Then Stafford threw his second interception. That was the first of many self-inflicted wounds perpetrated in the second half.

The Falcons capitalized on the Rams self-inflicted wounds

With 6:23 left in the third quarter, the Falcons took over the ball at the Rams’ 20-yard line after the Stafford interception. They quickly punched it in for their first touchdown of the day. 28-10. Then their defense made one of their first meaningful stops of the day with the Rams knocking on the door of another touchdown. AJ Terrell came up with a pass breakup in the end zone against Cooper Kupp and forced the Rams to settle for a field goal. 31-10

The defense continued to give up deep passes in the second half. One on the very next drive, in fact. They gave up 22 yards to London and the Falcons scored their second touchdown. 31-17.

Sean McVay must have felt comfortable with a 14-point lead with plenty of time left in the game. 8:14, to be exact. So comfortable he relaxed his play calling. With the six plays on the following drive, he called three run plays that amounted to a net ONE yard. The three passing plays netted 15 yards.

The Rams attempted their first punt of the game. An unblocked Atlanta gunner blocked the punt and returned it for a touchdown. The Falcons added two more with a conversion. 31-25.

The ensuing drama isn’t worth hashing out, other than Jalen Ramsey saved the day with an interception at the goal line and stopped the Falcons from potentially tying the game with just over a minute left in the game. It was only the second of six deep passes the Rams won on.

The questions about the Rams that remain

Keeping the Pedal to the Floor

Self-inflicted wounds are obviously unacceptable, but they happen and teams need to play like that. Fumbles happen, special teams fail, etc…

Sean McVay’s play calling with a few minutes left in the game implied he thought the Rams had won the game. McVay called a great game, other than that drive. He was aggressive, he used the running game smartly. For most of the game.

What he failed to recognize was that the team on the other sideline was thoroughly convinced they were still in it. The Falcons played like it. Arthur Smith called aggressively till the end and nearly got the win because of it.

The Rams will play several more scrappy teams like the Falcons this year. The Saints, Seattle, the Raiders, and the Cowboys have all shown grit. Not to mention, everybody is going to be gunning for the Super Bowl champions, right down to the wire. McVay will have to be more prepared the next time he faces an unrelenting team.

The offensive line played much better and the Falcons defensive line is no slouch. But the injuries are mounting up. Tremayne Anchrum was carted off the field with an ankle injury and did not return. Alaric Jackson filled in for him. He was in because last week Brian Allen aggravated his knee and will be out for several weeks. Starting left tackle Joseph Noteboom played with significant hardware protecting his knee.

The Cardinals aren’t an imminent threat from a pass-rushing standpoint, but the Rams face the 49ers the week after. They are very much a top-five front seven defensive unit.

Regardless of the opponent, this starting five is very green and will have to learn fast.

Again, an improved unit from week one, but the Rams had two sacks against the Falcons and those came from inside linebacker, Bobby Wagner while rushing four and cornerback Decobie Durant on a blitz. Mariota really only felt pressure when the Rams were sending the house and on occasion made the Rams pay with his legs.

The lack of meaningful pressure allowed those deep plays to develop for Mariota and those kept the Falcons in the game. It’s something that Kyler Murray has excelled at in the past. (Not so much this season so far.)