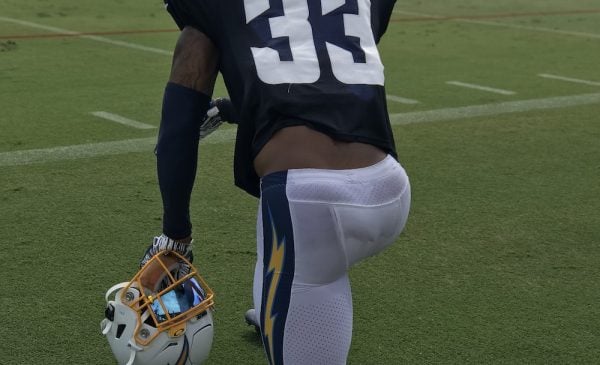 The Los Angeles Chargers earned their third straight victory over the Denver Broncos on Sunday. The Chargers were able to overcome a lot of injuries including Keenan Allen, Hunter Henry, Joey Bosa, and Uchenna Nwosu. The defense was able to hold their own for the most part, but the Broncos offense was rather anemic. Jerry Jeudy dropped a touchdown and Brandon McManus missed a field goal. It was a sloppy game by both sides, and it just so happened that the Chargers came out on top.

The good news, as always, revolves around Justin Herbert. He was able to orchestrate the third game-winning drive of his career and break the record for most touchdown passes by a rookie in NFL history. After their one and only touchdown drive, however, the Chargers offense was unable to get much going consistently. Vanilla play-calling and poor offensive line play have plagued the Chargers all season, and it nearly cost them on Sunday.

The three straight wins, and four of the past six, have inspired recent talk that Anthony Lynn might be saving his job. Even though these wins have been uninspiring at best and have come against some of the league’s worst teams. The Chargers had one of the easiest schedules in the NFL this season and have only been able to come away with six wins so far.

If the Chargers do decide to keep Lynn around for another season, they absolutely have to get upgrades at their coordinator spots. They already relieved George Stewart of his position as Special Teams Coordinator but Defensive Coordinator Gus Bradley and Offensive Coordinator Shane Steichen should be on the chopping block as well. Steichen is younger and serving in his first season so it seems like they might talk themselves into keeping him around, and hope that he improves in year two.

Let’s focus on Gus Bradley for now. It made a lot of sense for Lynn to hire Bradley to be the team’s defensive coordinator back in 2017. Bradley of course is a disciple of that famed Seattle Cover Three scheme that has become so popular in the NFL. The conservative nature of the scheme fits well with Lynn’s overall philosophy as a coach. But teams around the league have figured that scheme out and Lynn has been slowly shifting away from that scheme.

He wanted to put a larger focus on creating more turnovers by playing more man to man coverage and blitzing more often, and they have done that with more frequency since the bye week. However, that mentality obviously is not in line with what Bradley wants to do on defense. Therefore, he is the most likely coordinator to be fired.

The focus on hiring the next defensive coordinator needs to be in line with those two things and maintaining a 4-3 front. Here are five coaches that could be reasonable possibilities to replace Gus Bradley.

We’ll start with the Chargers in house candidate. We’ve already seen this approach from Lynn with the firing of Ken Wisenhunt and the promotion of Steichen. That hasn’t exactly worked out the way everyone would have hoped, but if Lynn prefers to keep this in house, then Milus is a logical choice. And to be fair to him, this would not be the same thing as promoting Steichen.

Milus has been with the Chargers for eight seasons now and is one of the best secondary coaches in the league. His relationship with Chris Harris was the primary reason why the former Bronco chose to play in Los Angeles in the first place. He’s done a fantastic job developing the talent in the secondary for the Chargers. He helped turn Casey Hayward into one of the best cornerbacks in the league, turned Michael Davis into an above-average corner, and Rayshawn Jenkins into a serviceable and versatile safety.

If there’s anyone who knows how to create a scheme that more effectively plays to the strengths of the talent they already have in the secondary, it’s Milus. He’s been a position coach in the NFL for twenty years now and has overseen some of the league’s best groups. It’s only a matter of time before he gets his shot as a defensive coordinator, and it might as well be with the team he’s been with for the last eight years.

When considering potential staff changes for the Chargers, the toughest part is taking into account the long term future. Potential candidates would be wise to take into consideration the possibility that they might not be in Los Angeles for very long. That of course limits the kind of candidates that they could attract. This could be more of a short term hire.

Enter Raheem Morris. He is currently getting some low-level buzz as a future head coaching candidate around the league. It seems unlikely that he gets promoted in Atlanta, and it also seems like he might be a year away from getting his own second chance at being a head coach. If he were to sign on with a team like the Chargers and take the defense to new heights in his first season, that would likely cement his status as a legitimate head coaching candidate.

Morris is intriguing as a future head coaching candidate because he has experience working in just about every facet of the game. As a defensive coordinator candidate, he would make sense because he’s done a great job turning around the Falcons defense two years in a row.

In 2019, he started the season working with the wide receivers but switched to the secondary mid-season. They went from worst in the league in takeaways in the first eight games, to second-most after they switched Morris over. They also went from dead last in sacks, to 10th. The defensive turnaround earned him a promotion to associate head coach and effectively saved Dan Quinn’s job – at least temporarily. He’s had similar success this year moving from defensive coordinator to interim head coach.

In terms of a potential temporary fix, Morris would be a very solid hire.

Now for someone that could be a long term fit. Two years ago, Kris Richard interviewed for five head coaching positions and was considered a rising star in the coaching world. Ultimately he stuck with the Dallas Cowboys for the 2019 season and it didn’t pan out. The team fired Jason Garrett and Mike McCarthy elected to not keep Richard on the new staff. Richard did not want to settle for a lesser position so he decided to sit the year out. Call it a Covid opt-out, if you want.

He’s received some minor buzz for head coaching positions this year, but he absolutely should get a shot at being a defensive coordinator. Richard comes from the Seattle coaching tree and even served as the team’s defensive coordinator from 2015 to 2017, so he would have to adapt his scheme if the pairing were to work.

Then he went to Dallas as the team’s passing game coordinator and secondary coach and brought a lot of stability to that unit. He played a crucial role in developing Byron Jones, and Jaylon Smith into high-quality players for the Cowboys. The scheme fit could be a little redundant, but Richard is respected enough in the coaching circuit that I believe he could make it work. It’s only a matter of time before he gets his chance as a full-time defensive coordinator.

File this one under the desperation category. If Lynn is feeling a lot of pressure (which he should) to win in 2021, he could reach out to his former boss and convince him to come to Los Angeles and help him save his job. Rex Ryan traditionally runs a much different scheme than what the Chargers have been running during Lynn’s tenure, but it does fit the mold of switching to a more aggressive style.

Ryan’s son Seth already works with the Chargers as the team’s wide receiver’s coach (Phil McGeoghan is still away from the team), so if there is an environment where Ryan could feel comfortable enough to get back into coaching, it’s in Los Angeles. Ryan should not be a head coach again, but returning to a defensive coordinator position could make a lot of sense. Especially for someone that is desperate to win like Lynn would be in this scenario.

I highly doubt that Lynn would be able to pull off this kind of move, but it is worth mentioning. Jerod Mayo is considered a rising star within the coaching ranks. He was a fantastic player for the Patriots and seems to be having the same kind of success as a position coach. He’s only been a coach since 2019, so a lack of experience could be somewhat of a concern. But like Morris, he is already receiving low-level buzz for head coaching positions.

A promotion offer from the Chargers, and the chance to work with a defense featuring established players such as Bosa, and Derwin James, and a rising star in Kenneth Murray, could be just the right kind of situation for Mayo to spread his wings.

The Patriots defense is complicated, and it certainly has not worked in every place where Bill Belichick’s disciples have tried to replicate it, however, none of those other places have players as talented as Bosa, James, and Murray. Mayo knows that system arguably better than anyone because he has had success in it, both as a player and as a coach. He has also done a fantastic job in developing the young Patriots linebackers in D’onta Hightower’s absence, and that should carry a lot of weight.