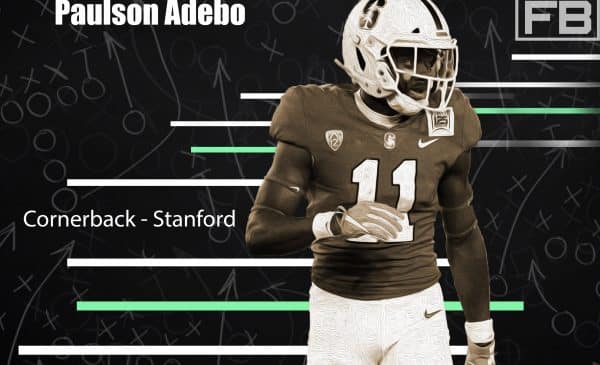 The upcoming cornerback class has been the most disrespected class of the cycle. All throughout the draft process, we have heard how weak, or how top-heavy of a class it is. These are false narratives, in my opinion. The depth of this class is outstanding and there are several players who have some great developmental traits with legitimate cornerback one potential. Stanford’s Paulson Adebo is one of those players.

He burst onto the college football scene during his redshirt freshman season in 2018 when he led the Pac-12 in interceptions with four, and the entire country with 24 pass break-ups. Adebo’s play that year earned him first-team All-American honors, and he looked like he was going to be the next great cornerback prospect. Unfortunately, he had what was perceived as a worse season in 2019 and missed the last three games to injury. Despite the national perception, he still had four interceptions that year and was awarded first All-Conference honors. Adebo decided to return for his junior season in an attempt to improve his draft stock but ultimately opted out of the 2020 season like many other prospects around the country.

The Los Angeles Chargers and Los Angeles Rams will each need to add to their cornerback rooms in this upcoming draft. The Chargers obviously released Casey Hayward to free up cap space to upgrade the offensive line after a poor and injury-riddled 2020 season. Chris Harris is also playing on a contract season so they will have to add depth to that position.

The Rams lost Troy Hill to the Browns via free agency and Darious Williams is playing on a contract year as well unless the two sides can come to a long-term extension before or during the season. With how much overlap there will be between the two teams’ defenses, Adebo would be a natural scheme fit for either team.

That being said, let’s get into Adebo’s profile.

Despite missing three games in 2019 and having a “down year”, Adebo enters the NFL with the most ball production of any corner in this class over their last two seasons of college play. Combined over the 2018 and 2019 seasons – a total of 21 games, he registered 38 pass break-ups and eight interceptions. That is simply an absurd amount of production no matter how you shake it.

Adebo played wide receiver and corner in high school, and that background as a receiver has definitely translated to the way he plays the cornerback position. He attacks every single route with the intent to be a disruptive force. His aggressive mentality and production should do him well in the NFL.

Adebo has the kind of versatile skill set that makes him an ideal target for either team in Los Angeles, and frankly any team in the league. He played on the outside for the majority of his career, but when Stanford needed him to, he would travel into the slot. In particular, he did this quite frequently against Utah’s Britain Covey in 2018, and USC’s Amon-Ra St Brown in 2019.

He’s also very comfortable in press-man, off coverage, and zone coverage. There are some pundits who believe he would be best suited in a cover three kind of scheme where he can play off of the line of scrimmage and then simply read and react to the ball. He can certainly do that, however, I think that would be a waste of his aggressive nature and athletic profile – his Relative Athletic Score is top 10 in the class. He brings a 76-inch wingspan to the table which allows him to control and reroute receivers at the top of routes at a very high level. I believe he’ll thrive in a man-to-man defense that will allow him to be physical with opposing wide receivers.

There’s just something about Stanford and smart corners who used to be wide receivers, isn’t there? Now, I am not comparing Adebo to Richard Sherman the NFL player, but in terms of who they were in college, they do share a lot of similarities. Football IQ, and intelligence on the field being chief among them. Adebo pairs his top-tier athletic traits with an incredibly high sense of awareness.

When he is off the line of scrimmage he is able to read and anticipate routes at a very high level, something that Sherman and Hayward have been able to make great careers out of. Another area where his IQ shows up is in the communication department. Adebo was often the most active pre-snap player on Stanford’s defense in the games that I watched on film. He’s also excellent at passing off routes in zone coverage. I rarely saw any blown coverages with him involved.

Football IQ from Stanford CB Paulson Adebo here (bottom). 3rd and 7 w/ inside leverage at the snap, expecting an out-breaker just beyond the sticks. Opens and angles to stay upfield until the route declares, then explodes to catch point. Good play on ball (ex WR recruit). pic.twitter.com/6NKDZVB7ME

Efficiency As A Tackler

Adebo is an aggressive and physical player. He’s a very willing tackler in run support. However, he can be overzealous at times which occasionally leads to poor technique. Adebo missed eleven tackles over his last two seasons at Stanford. That’s not a terrible number for a linebacker, but it’s certainly not ideal for a corner. Whoever drafts him will have to find a balance between letting him be aggressive, while also fine-tuning his technique. This is a very doable thing.

Will Rams trade into the 1st round of the 2021 NFL Draft? - Powered By PickUp

I mentioned above that football IQ was one of Adebo’s stronger attributes. However, he does fall victim to being a little overconfident or inconsistent with his eyes. This gives opposing wide receivers windows to catch the ball more often than a player like Adebo should allow. The worst game that Adebo played in his two years at Stanford happened against UCF. Gabriel Davis gave him fits, particularly with double moves. Davis got him three or four times that day because Adebo’s eyes wandered off to the quarterback instead of staying on Davis’ hips. This kind of thing is not uncommon, and it’s something that even players at the top of the draft boards at the position struggle with too.

When corners are pressing at the line of scrimmage, they often get stuck in bump and run situations. One of the downsides of consistently playing in that technique is that it can leave corners vulnerable to comebacks or double moves. In these situations, players can sometimes get attached to the inner shoulder of the opposing receiver.

This creates a difficult challenge for corners because they have to be ready for the receivers to change direction in an instant. Experienced and technical route runners love going against bump and run because cornerbacks who are a little stiff in the hips tend to struggle to change directions quickly.

This is the case with Adebo. Again, this is something that is correctable. He’ll have to hone in his hand fighting techniques in order to stay on top of the routes, as well as continue to improve his footwork at the top of routes.

I believe that Adebo is someone that should appeal to NFL teams due to his explosive athleticism, length, and outstanding ball production. He would be a fantastic fit for the Chargers or Rams due to his positional versatility, and I would not be surprised if either team took him in the second round. I have him graded as my sixth-highest corner and 40th player overall in this class.