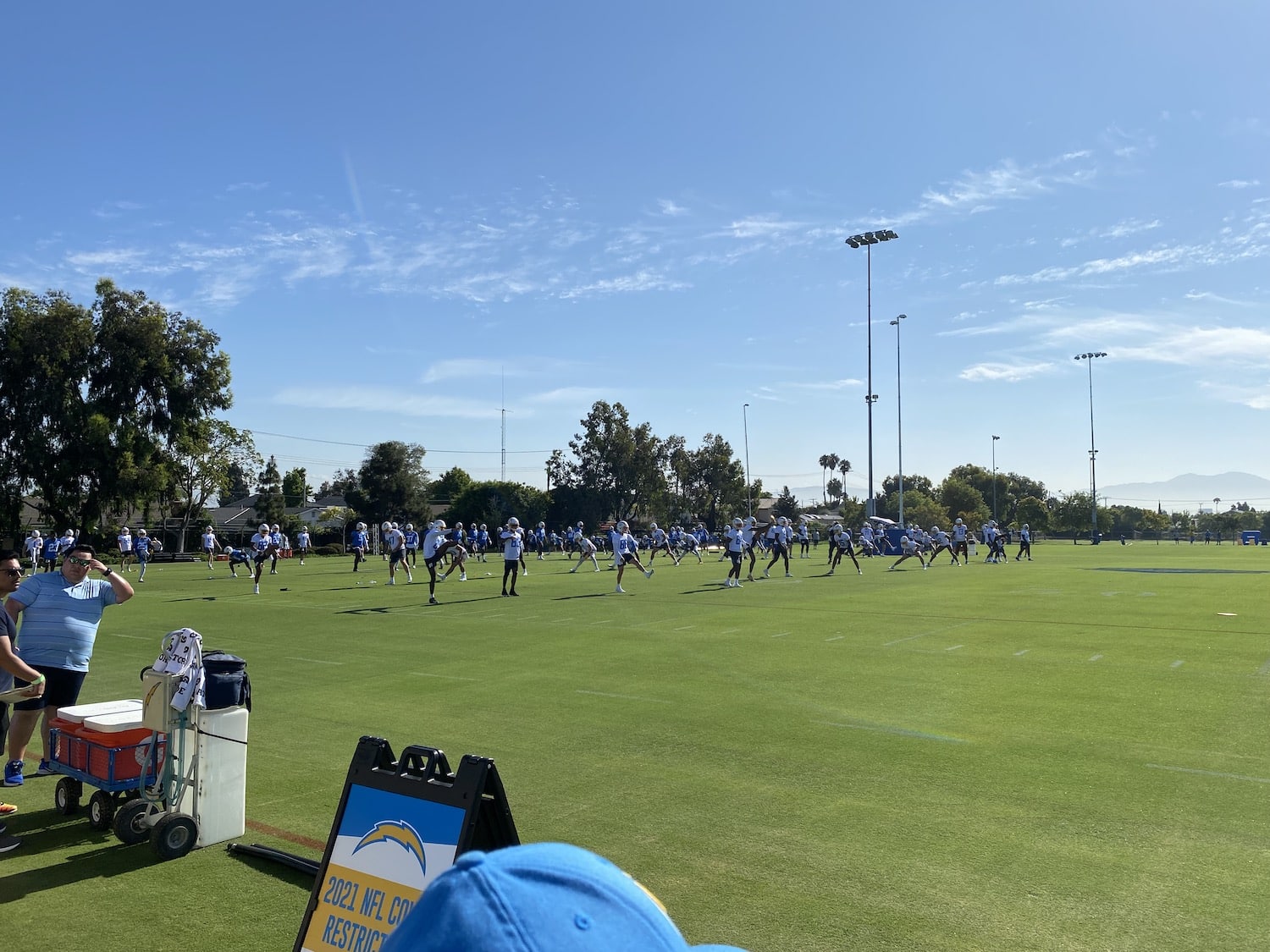 My emergency alarm clock went off at 6:30 am. Typically, my one-year-old daughter wakes up for the day around 5:30, but today she decided to sleep in because, of course. I scrambled to get ready, get my daughter dressed, and rushed over to my mother-in-law’s house to drop her off before heading down to Costa Mesa.

I arrived to the smell of freshly cut grass. The sound of whistles chirping, and cleats shredding said grass. Day One brought plenty of excitement, and now it was time for improvements to be made for the Los Angeles Chargers on Day Two. Training camp, and Football in July, are truly poetry in motion. Here are my takeaways from a balmy 74-degree day at Jack Hammet Sports Complex.

Josh Palmer Has Sweet Feet And An Explosive Burst

We all know that Keenan Allen is the best route runner in the NFL. So it’s no surprise watching his footwork at camp and seeing the beauty of a California sunset. Rookie Josh Palmer, however, is someone that fans need to pay attention to.

His combination of size, speed, catch-radius, hands, and route-running ability continue to build the mystique of the former Volunteer, and based on the early work that I’ve seen, he will be on the field on game days sooner than later.

Kind of a funny looking drill since there is so much stutter stepping, but Josh Palmer is so fluid out of his breaks and has great explosion.@LAFBNetwork | #LAFB | #BoltUp pic.twitter.com/l2e63ztD5F

You have to watch this drill closely because it looks kind of awkward. The idea is to combine quickness, stutter-stepping, and exploding out of the break. You can see Palmer’s explosiveness on display in this video. This is a key component to gaining separation from defenders and should get fans excited about his potential as the number three wide receiver early on. His footwork is also extremely smooth and fluid. A lot of receivers have really poor footwork if you really watch closely. Some are so big and fast that they can get away with it, but when a player can combine that speed and size with sound footwork, they start finding themselves in the “elite” conversation.

Palmer is certainly not there yet (he has yet to even play a down in the NFL), but he is showing signs of greatness early on in camp.

Austin Proehl Could Make The Team

The former XFL Seattle Dragons star joined the Chargers this offseason with a glimmer of hope to make the final 53-man roster. Two days into camp, he is the one, at least in my humble opinion, instilling the most confidence in the return game.

Maybe because I was a punt returner in high school, but you can tell the confidence in a return man fairly easily. As the ball is in the air, watch how they track the ball. Are they all over the place? Do they second guess positioning with their feet? Are their shoulders and base aligned when the ball comes within the catch radius? These are all cues as to whether a player is confident in his return abilities. It starts with those tendencies and then ends with the player actually catching the ball.

Tyron Johnson, Jalen Guyton, and K.J. Hill were the other guys to field punts, and far and away, Proehl has looked to be the most confident and comfortable. He could really carve out a role with this team in a position that has been a need for quite some time.

Aside from his return abilities, he is actually a really solid receiver that could be used on offense if needed, as well. His biggest knock is probably his size (5’10, 175 lbs), but he can make up for it in speed (4.4 40), quick feet, and very reliable hands. He put his receiving skills on display during the second day of camp.

A lot can change over the next few weeks, but in the early onset, Proehl has earned a spot on this squad.

Mark Webb Can Be The Chargers Version Of Jordan Fuller

Every player is an individual and each brings a special skill-set individual to them. However, the similarities between Rams 2nd-year safety Jordan Fuller and Chargers rookie safety Mark Webb, are too many to ignore.

Both players, however, were considered extremely smart football players and leaders on the field.

If you aren’t familiar with Fuller’s story, he was selected by the Rams in the 6th round and was considered a depth piece. He ended up shining in camp and Staley named him the starter for week one alongside John Johnson. I’m not saying Webb will dethrone Nasir Adderley as the safety alongside Derwin James, but clearly, Brandon Staley saw a little bit of Fuller in Webb and has high expectations that he can make an impact on this team immediately.

Fast forward to day two of training camp and Webb secured an interception off of Easton Stick in 11s. *Checks notes.

Justin Herbert will always lead more on the quiet side. That is just his personality. But now that he is the man in the Chargers organization, and a savant in Los Angeles, you can tell that he is upping the swagger just a bit. His play style just exudes confidence. He throws every pass with purpose, and the ball rotation is truly a thing of beauty.

In today’s NFL, where the media loves to fawn over the creativity of Patrick Mahomes, and the power of Josh Allen, it is actually amazing to me that Herbert does not get more love considering he brandishes both of those traits. But something tells me that he wouldn’t want it like that. He can smile and play his way to a Pro Bowl. Confidence: check. Let’s keep it rolling Herb.

See you all tomorrow for day three of camp! Hit me up on Twitter if you’re gonna be there or just want to talk Chargers football!