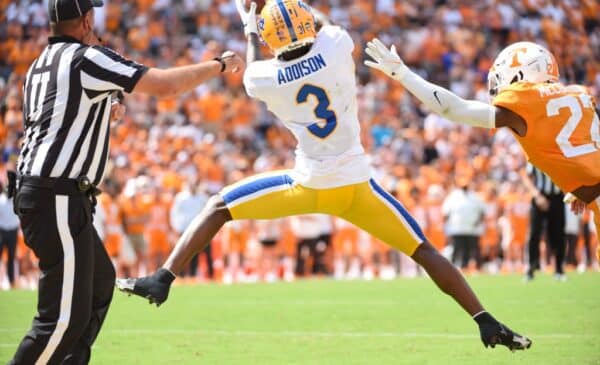 Usually, if programs like Georgia, Alabama, Texas, and USC are all going after one player, it’s more often than not, worth it. I can tell you former Pittsburgh Panther wide receiver Jordan Addison is a difference-maker immediately. After remaining in the transfer portal for quite some time, programs had created huge NIL deals and packages for the Biletnikoff Award Winner.

It was reported earlier in the week that Addison had cut his decision down to two teams, Texas and Southern California. This was shocking to most considering Addison was seen training with Alabama QB Bryce Young and the illustrious reputation of coach Nick Saban. It’s only right that the two teams that were left in the running were very familiar with each other. Vince Young and Pete Carrol ring a bell?; If you know you know.

Jordan Addison had 100 receptions for 1,593 yards and 17 touchdowns. He was, now NFL quarterback, Kenny Pickett‘s favorite target in 2021. This was for good reason, Addison has a unique combination of elite agility, speed, and route-running ability. Adding that type of production into an offense will undoubtedly be the difference-maker in multiple games this year.

It’s no secret that head coach Lincoln Riley has quite literally changed the landscape of college football for years to come. It’s no longer SEC teams getting the advantage with top 100 prospects or dominating the transfer portal. With the addition of Jordan Addison, this USC offense will be even more dangerous than they already were. Caleb Williams alone will make a world of difference, now that you have transfers like Mario Williams, Brenden Rice, and junior Gary Bryant. Addison makes this wide receiver room one of the best in the country.

Jordan Addison being a USC Trojan will send shockwaves through the college football world. What do you think? How will Addison fare this year with USC?

Play The Prop Below!

Addison vs. Williams: More TDs in 2022 season? - Powered By PickUp