One year after losing the Super Bowl to Tom Brady and the Patriots, the Rams have replaced established names with relative unknowns at many key positions.

Many Rams fans feel that since Head Coach Sean McVay was able to lead a team to the Super Bowl he can, therefore, do no wrong and now that he has “his guys,” the Rams will quickly bounce back to the top of the NFC. However, history shows that this is not a guarantee. Just recently, a team was in the same position and ended up falling into the depths of obscurity: the Denver Broncos.

The Broncos should be looked at as a cautionary tale when it comes to replacing established names with supposed up-and-comers after reaching the heights of success. Put simply, the Rams should be very careful as they head into 2020 with these new names on the roster and in the coaching staff.

The Denver Broncos won a Super Bowl at the end of the 2015 season, allowing quarterback Peyton Manning to ride off into the sunset in the same way that John Elway, the Broncos general manager, was able to do at the end of his playing career.

After Manning left, the Broncos were able to put together a decent season, finishing at 9-7 while barely missing the playoffs. However, from 2016 to 2017, the Broncos replaced most of the established names that were apart of the team that had won the Super Bowl with names that were relatively unknown by most. For example, Peyton Manning was replaced by Trevor Siemian, Head Coach Gary Kubiak was replaced by Vance Joseph, and defensive coordinator Wade Phillips was replaced by Joe Woods. With these changes in place, 2017 and 2018 saw the Broncos fall off a cliff, finishing with 5-11 and 6-10 records, respectively.

Since then, it appears that the Broncos have flipped a U-turn in philosophy, replacing all of those unknown names with bigger names and longer resumes like Vic Fangio (responsible for the Chicago Bears making the playoffs in 2018), Pat Shurmer (responsible for using Case Keenum to lead the Vikings to the NFC championship game after the 2017 season), and offensive line coach Mike Munchak (who is widely regarded as one of the best offensive line coaches in the league). If one were to ask a Broncos fan today, they would much rather have a respected name than a nobody.

Now, the Rams are in a very similar situation to the Denver Broncos circa early 2017. They both had played in a Super Bowl two seasons prior and followed it up with a 9-7 season. Also, two seasons after playing in the Super Bowl, Sean McVay is now moving on from established names and replacing them with Googlers (people that most need to look up online to learn who they are). For instance, defensive coordinator Wade Phillips is being replaced by Brandon Staley, the offensive line has been largely rebuilt with unknown names, and, finally, with the exit of special teams coach John Fassel, it is almost guaranteed that his replacement will be an unproven up-and-comer as well. Basically, just like the Broncos did, the Rams are replacing established names with unknowns.

Of course, these changes in California are not as extreme as those in Colorado: the Rams will be keeping their head coach and quarterback intact, unlike the Broncos. However, besides that, the overarching themes of the story are lining up with what Denver did, and as history shows, the results were not pretty.

Will the Rams suffer the same fate as the Broncos? It is not a foregone conclusion either way. That being said, for those confident in Sean McVay’s abilities, it must be made clear that it was not all that long ago that John Elway was considered one of the top general managers in the league in a similar way to how McVay is now lauded as one of the best coaches in the league. If the Broncos can fall off a cliff three years after winning a Super Bowl, it can definitely happen the Rams three years after losing one. 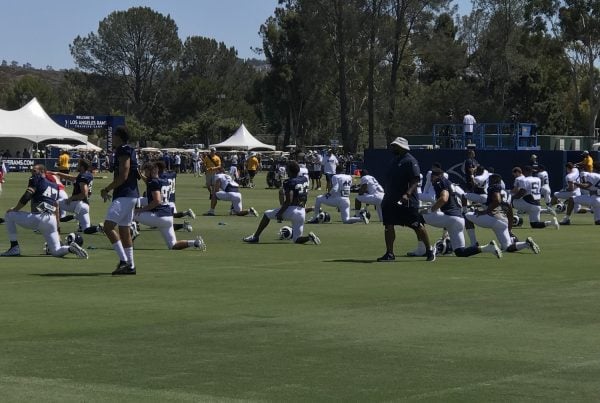 Who Will Be The Rams Surprise Player Of 2020?

Ian is a hardcore Denver Broncos fan. He spends his Sundays watching the games and follows the team closely. If Pro Football is on, he is watching it.