By Frank SumrallJuly 4, 2017No Comments To say Cleveland has seen misfortune is an understatement. From atrocious draft choices to sloppy play and unlucky bounces, the Browns have become synonymous with paper bag fans and the butt of all internet sports jokes. Yes, the Browns are a long way from glory but that doesn’t mean their history is not noteworthy. Let’s remind NFL viewers of the glory days of the Dawg Pound with the top ten moments in their long and elaborate history.

The current day Browns have had their moments above mediocrity. Wide Receiver phenom Josh Gordon had a career year in 2013, producing 1,646 yards and nine touchdowns in just 14 games on his way to an All-Pro first team campaign. On top of holding the Cleveland single-season receiving yards record, his 261-yard performance against Jacksonville is the most in Browns history. He became the first receiver to have back-to-back 200 yard games and holds the league record for most yards in a two, three, and four game span. Furthermore, these accomplishments came with Jason Campbell, Brian Hoyer and Brandon Weeden tossing the pigskin to him. The season ended with a 4-12 record and became the last productive sighting the NFL ever saw of Josh Gordon after multiple suspensions following his sensational year. Oh, what could have been.

Looking up at the rafters of First Energy Stadium and next to the legends like Jim Brown and Otto Graham is the No. 45 brown and orange jersey. Ernie Davis never played a down for the Browns as he died of leukemia in the offseason before his rookie year, but his impact is unparalleled. After being drafted No. 1 overall by the Washington Redskins, he was flipped to Cleveland to form what could have been one of the most daunting running back duos of all time alongside Jim Brown. But after becoming the first African-American player to ever win the Heisman trophy, his tragic death ended a promising career. Cleveland reminded the football community of the humanity beyond the gridiron, a very powerful moment in NFL history. The new century has not been kind to Cleveland, but the 2007 draft oozing with talent found a way to the Browns anyhow. Joe Thomas became the fourth player in NFL history to make a Pro Bowl in his first ten seasons and is the only Brown to do so. He is the only lineman to reach the Pro Bowl in his first seven seasons. Thomas remains as a bright spot in an otherwise dark era and has developed into the greatest lineman of his generation.

Arguably the greatest player to ever step foot on a football field, Jim Brown had a season to remember in 1963. His defining campaign left him without an MVP, but his accomplishments dumbfounded the league. He created a new standard in rushing dominance, setting a league record in rushing yards in a season with 1,863 for ten years until O.J. Simpson‘s 1973 campaign. Brown’s mark still stands as the most in Cleveland Browns history. His 6.4 yards per attempt is tied with Jamaal Charles for the highest in league history minimum 200 attempts. Top it off with his 133.1 yards per game (second all time) and this remains as one of the greatest seasons for any player, let alone a Cleveland Brown.

6. Football Comes Back To Cleveland

After fighting for their precious Browns to stay in the heart of Ohio, the team left under a different name. Can’t blame Baltimore after their team bolted for Ohio’s neighbor decades before, but it still left a hole in Cleveland. A three-year drought was all it took before football was back in town, a monumental moment in their history. St. Louis and San Diego had their football hearts ripped out, not to mention the Emerald City of Seattle losing their Sonics nine years ago, so it’s important to celebrate the return of a football club, especially the one closest to Canton. It’s just disappointing to see the polar opposites in terms of success between Baltimore and Cleveland. 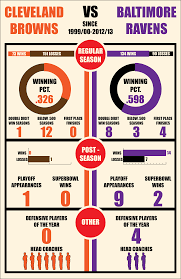 A comparison model between the Browns and the Ravens circa 1999

Players who strictly placekicked weren’t always in existence in the NFL. Lou Groza, a multi-dimensional player who played offensive lineman and kicker while receiving passes from Otto Graham, had a season to remember in 1954. Setting a new record in field goal efficiency with the most field goals made all while lining up at the line to protect his quarterback. His legendary kicking style made him the forefront in specialized kickers and established the new position. Sporting News crowned him League MVP as he helped change football into the glorious sport it is today. The Miami Dolphins were not the only team to go undefeated in history. The Browns went 15-0 in the All-America Football Conference. It may not have been the official NFL, but the Browns ran that league in its four-year history. They won the title every year and won 29 games in a row, with their perfect season sandwiched in the middle. While the longest win streak the NFL has witnessed was 21 games by the Patriots.

Before LeBron’s heroic performance and Kyrie Irving’s three-point dagger to grant the city of Cleveland a title, this 1964 championship was all they had. It was their last taste of glory and it was the only title Jim Brown, the greatest player in Browns history, claimed. They faced a daunting Johnny Unitas Colts team, and despite being a seven-point underdog, they won 27-0. The lopsided win made this one of the greatest triumphs in Cleveland sports history.

In 1946, Paul Brown put social stigma aside in favor of equality and winning. A year before Jackie Robinson hit the diamond for Brooklyn, Brown brought in Bill Willis and Marion Motley to join the Browns. They were the first two black athletes in football, thus beginning to break the “unwritten” color barrier haunting the gridiron. Paul Brown’s contributions to football went beyond X’s & O’s, making this an invaluable piece in football lore.

With New England claiming their fifth Super Bowl, it is easy to crown them the greatest dynasty in history. But the media fails to mention the Browns of the 1940’s and 50’s. This team with quarterback Otto Graham and coach Paul Brown went to 10 consecutive championships and won seven of them. Four of those came from the AAFL, but they were just as dominant in the NFL. Paul Bown’s innovations to football were unheard of and need to be celebrated. He was ahead of his time and so were the Browns, creating arguably the greatest dynasty ever to hit the turf.