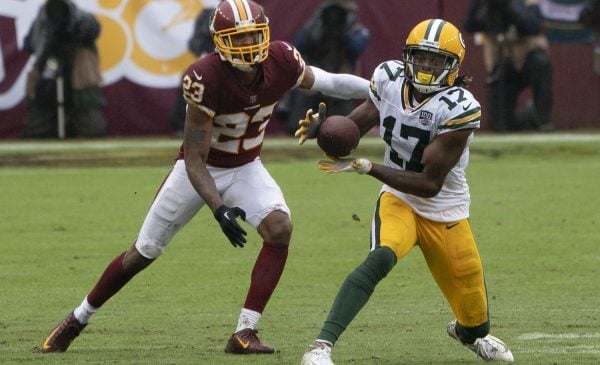 Hello and welcome back to your favorite fantasy football website LAFB Network fam. In today’s article, we’re going to be tackling some draft strategies for the upcoming season.

In Vol. I found here, we went through draft picks four, six, and 10, drafting our starting RBs first. This time around we are going to go the opposite direction, drafting WRs as our first two picks.

When doing the research for this article I used the Yahoo! Fantasy App as my aid.

Just like last time, I drafted in three different spots to give a variety of outcomes: 2nd, 7th, and 11th. This one was a little rough because I felt wrong drafting a WR as the number two pick but these are the sacrifices I am willing to make for my fantasy brethren.

Pros: Who wouldn’t like Michael Thomas and Chris Godwin as their starting WRs? It is a pretty powerful duo if Godwin can produce with new QB Tom Brady. My WRs, in general, are pretty stocked with great depth.

Parker, Brown, Boyd, and maybe even Deebo Samuel all can slide into the FLEX spot with ease and fill some WR spots when bye weeks start rolling by. In total, there are four, possibly five, number 1 WRs on this team which is very enticing.

Finishing the team with Tannehill and Higbee also gives me some comfort because it doesn’t necessarily mean I have to commit to streaming QBs or TEs. Both were very respectable last season so hopefully, they can bring that over to this odd year.

Cons: Clearly I did not mention any RBs in the pros so you know I am not very pumped about my starters. Conner has the reputation of landing on the IR list. D’Andre Swift is an unproven talent that still needs to take over the starting spot from Kerryon Johnson.

Mack and Lindsay are on the other side of that coin. Mack is practically the backup and the same with Phillip Lindsay. With Melvin Gordon now in Denver, Lindsay will split carries at best and will lose pretty much all goal-line work.

Pros: Again, my starting WRs and even Cooper as my FLEX, is a devastating combo. They are practically a three-headed monster if Godwin hits this year.

I actually like Chris Carson because Seattle is a running football club, so gimme them points Pete Carroll. I went with a TE in a higher round again to keep from streaming the position, so hello Darren Waller.

Additionally, with the L.A. Rams backfield still in a muck, giving Henderson a shot in the 11th round wasn’t too big of a gamble. If he pans out you’ll look like a genius, if he’s a dud he didn’t cost much.

Cons: I would say my cons lie within the 7th to the 10th round: Guice, Slayton, Johnson, and Williams. None are names that carry a lot of joy.

Guice has the opportunity for the top RB spot but will he take it and stay healthy? Second-year QB Daniel Jones has Golden Tate, Sterling Shepard, and Darius Slayton as his WR corps. Making Slayton an “up in the air” type of pick.

Diontae Johnson and Mike Williams are playing on the opposite side of their team’s number 1 WR so that gave me some hope when drafting them. But even so, we want primetime numbers and we don’t know if that will happen for these two young men.

To add insult to injury, Mike Williams has Tyrod Taylor as the starter for the L.A. Chargers. He is a more mobile QB than Philip Rivers so instead of airing it out to Williams he could tuck it and run.

Pros: I love, love, love the first six, maybe even seven picks of this draft. I went RB a little later than I would normally go and it paid off.

Hill, Hopkins, Moore, and Woods as my WR corps look pretty fierce. Obviously there is a gamble when looking at Hopkins since he is on a new team but all that talent has to translate into Arizona’s offense.

My RBs don’t look too bad either. Bell has something to prove, so I’ll lean on him in the 4th round. The Bills have rid themselves of Frank Gore so that means Singletary is the primary man in the backfield of Buffalo and we snagged him in the 6th round.

I might like Michel a little extra this year because of the fact that New England has new blood as their starting QB. Cam Newton isn’t the mobile QB he once was and we all know he can feed his RB the rock both in the air and on the ground.

I also didn’t mind picking up Alexander Mattison in the 12th round. Dalvin Cook has been known to go down to injury so having his backup might be a wise shot in the dark.

Cons: So as I am sure you noticed, Damien Williams has a little * next to him. Well, that’s because Williams decided to opt-out of the 2020 football season. This pushes Clyde Edwards-Helaire into the starting role for the Chiefs.

Of course, the news broke after I already did the research for this draft but Williams was drafted in the 8th round but it’s not like we were missing out on any big talents during the round.

Like the other teams, Johnson and Sheppard might be the weaker talents on the roster but provide depth.

Hooper, on the other hand, we got in the 10th round so he didn’t cost us, but can he still have the production that Matt Ryan and the Falcons gave him?

Shepard, as mentioned before, doesn’t really give us too much excitement because of his team’s WR corps.

What Can We Conclude?

What did we learn this time around?

It definitely looks as though my inclinations about Yahoo!’s value on RBs is intact. All of my teams went WR for the first two rounds and none of the teams received a grade B or higher.

I can’t say I disagree, especially when you look at parts of my teams. For the most part, each team has one RB that is cemented with value but the second RB on the team is much weaker.

Weaker might be the wrong word, maybe the second RB is more of the “hopeful pick” to help fill out starting lineups.

Either way you slice it, whatever position you draft first will lead to the weaker offset. If your first two picks are WR or RB, then the following RB or WR you draft won’t have as much production on your team.

I think with this strategy, we might feel it more because of the weight that RBs hold compared to WRs. Wide Receivers are more of a dime a dozen kind of catch, while the RB column really only offers 15 solid starters.

With the next strategy, I will try to build a team with fantasy football’s most sought after player, Christian McCaffrey. With the first pick in the draft McCaffrey is the obvious player to grab but what will the rest of your team look like? Catch us next time for the results.