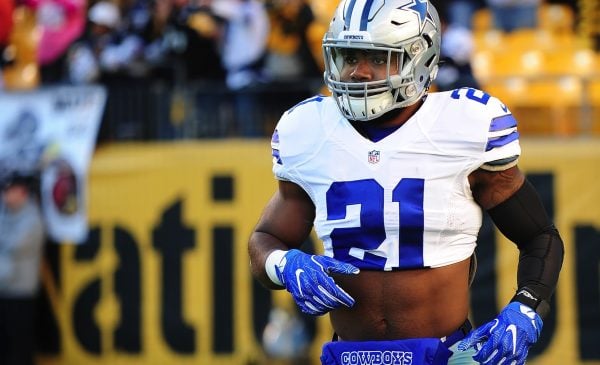 Hello and welcome beautiful readers of the LAFB Network. The next few articles that I will be sharing with you will be some different draft strategies when attacking your redraft league.

In Vol I, I am going to be covering the draft strategy of my first two picks being RBs, then filling out the rest of my roster. My research was done through the Yahoo! Fantasy App and that was mainly to see their grade for my pseudo teams.

Yahoo! Grade: A-
So it is clear that Yahoo! agrees with the decision to go two RBs as the first two picks. And I can’t say I disagree because obviously the RB quality is pretty top-notch.

In past drafts, I would personally run a zero-RB kind of draft with a bit of a twist. Instead of waiting until the 5th or 6th rounds to start drafting my RB corps, I would go my first two or three picks being WR, then switching to RBs after.

After this research, I might rethink some parts of my own draft strategy. Interestingly enough I like parts and pieces of each team but don’t like a few spots as well.

The first five picks are fairly reliable but if you read my previous article, Mid-Round Values, you would have seen that Mark Ingram was one of those players. This is a perfect instance of draft buoyancy.

When the tides turn sideways, ultimately the production of your team depends on how you react. In this situation, I think it was a good solution because the next RBs I drafted on the team were Guice and Cohen. Meaning, there were no other reliable RB options later in the draft.

Other than RB, Aaron Rodgers in the 10th round is pretty good but still a little early to be picking QBs.

What I liked in my RBs, I didn’t enjoy in my WRs. For the most part, my WR corps is a few heavy hitters coupled with a bunch of young unproven talent.

Fuller is fragile, Hardman is wildly inconsistent, and Slayton and Samuel have a lot of momentum from last season that needs to be rolled over onto this one.

Although these are the cons, I do like the fact that Samuel and Fuller are competing for top spots on their teams. This means they’ll have more opportunities for fantasy points on a week to week basis!

Another “meh” moment on the team would be my TE, Mike Gesicki. Going this late on TE means I will have to commit to streaming TEs on a moment’s notice.

Again, the first five picks are pretty reliable. This time around I went TE a little earlier, so let’s hope Jared Cook can continue his upward trajectory.

Other than Cook, I think the RB depth doesn’t look too bad for the beginning of the season. Marlon Mack and Kerryon Johnson have the starting spot for the time being but things could change within a month.

On the WR side, I like Gallop, Diontae Johnson, and Crowder. Gallop and Johnson have the WR2 role on their teams but more importantly, they’ll be getting love from the QBs because of their lighter coverage.

Crowder is on a hurricane of a team but with Sam Darnold still needing to find his best-receiver friend, there’s some upside.

My main concern is the surrounding cast of my starting team. I mentioned the RB depth being good in the beginning but when it comes time for their replacements to step forward, my team is then converted to backups. Even Breida doesn’t have a certain spot in his new home.

Same with my WRs. If they never prove their worth to their teams then the next man up with undoubtedly fight to take their spot.

I actually think the 10th pick might offer the most talent for the starting roster of my team. Chubb, Sanders, Cooper, Moore, Hilton, and Waller filling out starting spots from RB to TE to FLEX.

Then landing Ronald Jones, the current starter for the Bucs, and Marquise Brown as the leading WR on the Ravens. Crowder joins the team because of his target reliability.

This time around I actually drafted Breida a few rounds later than the previous draft. That makes him less of a con and more of a pro because instead of putting a higher round value on him, I get to test him out for less.

Jarvis Landry and Darrell Henderson. Landry had his big surprise season with Baker Mayfield last season but can he reproduce?

Henderson too has been on the field with the Rams but hasn’t shown them that he wants to be the full-time back. Even if he did, we don’t know that he would get it since the Rams run their RBs a little differently than other teams in the league, and they drafted Cam Akers in this year’s draft.

Well, what did we learn?

Personally, I think Yahoo! values RBs too much since they gave each of my teams As, but that’s under speculation. Next time I will try a different strategy that will test this theory, so let’s leave this as TBD.

What I took out of this was seeing the WR talent after the first few rounds. From my teams in rounds three to six, players such as Adam Thielen, OBJ, Amari Cooper, D.J. Moore, Robert Woods, DeVante Parker, and T.Y. Hilton, are all available.

Seeing this is what initially made me rethink my personal draft strategy. If the players that are mentioned above are available after the second round, then why not grab RBs first?

If I was to condone this strategy, I would definitely prefer to have the higher draft position. This is primarily because of the tier of RB your first pick is going to be. And if we look at ESPN’s ADP we can see that players available after the 24th pick are: Kenny Golladay, Adam Thielen, Amari Cooper, D.J. Moore, and JuJu Smith-Schuster.

Not too bad of company to pick receivers from.