The Rams finally found an inside linebacker they can rely on. Ernest Jones proved to be a good addition to the defense. A look at what he brings 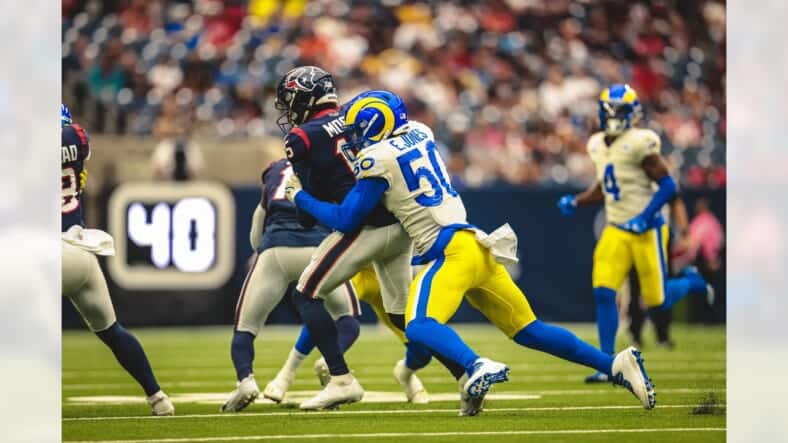 Even the smartest football minds have blindspots. Bill Belichick can’t draft a wide receiver to save his life, anyone that’s ever worked for the Browns can’t draft a quarterback, and Les Snead struggles to draft quality linebackers. It’s true, the linebacker position used to be held together by duct tape, inanimate carbon rods, converted DBs, and the bones of former stars.

Now, it appears he’s finally found a homegrown stud in Ernest Jones, and as Snead does he found him outside the first round and received a large amount of skepticism in the beginning. Ernest Jones had a solid rookie season before injuries derailed him and then he came back to make plays in the Super Bowl including a sack late in the third quarter. Now, Jones is a starter playing alongside newly acquired veteran Bobby Wagner. All signs point to Ernest Jones being a cornerstone of the Rams’ defense and based on his reviews in camp, that’s a problem for the rest of the league.

Ernest Jones was the 104th pick in the 2021 draft out of South Carolina and the evaluations on him both by analysts from the studio and couch weren’t totally kind. Even the compliments felt a TAD backhanded, as he was praised for his high football IQ, consistency, great instincts, aggressive mentality, etc, but it’s all undercut by the idea that he wasn’t athletic.

Athleticism is obviously important but it shouldn’t be the only thing and despite what Kenny Powers would say fundamentals aren’t just a crutch for the untalented. If athleticism were everything Les Snead would’ve hit a home run with Alec Ogletree and Jones’ fellow Gamecock Jadeveon Clowney wouldn’t be dining out on the same highlight for over a decade.

Still, Jones came into camp with a large amount of skepticism and turned heads but he came into the season behind Kenny Young on the depth chart (reasonable), Justin Hollins (understandable), and Troy Reeder (ALARMING). Young of course went to Denver for what seemed like a washing machine but turned out to be for Von Miller and now it was Ernest Jones’ time to shine.

Jones started seven games amassing 36 tackles, one sack, and two interceptions most famously on Monday Night Football against the Cardinals. He made a major impact on defense specifically in run defense an area that of course led to the successful fan campaign to fire Raheem Morris. Sadly, on December 28th the Rams put him on IR due to an ankle surgery that came against the Vikings. Fortunately, he was able to return for the NFC Championship game where he only had two assisted tackles but in the Super Bowl, he had seven tackles, three QB hits, and of course a sack on Joe Burrow.

The Rams signed Bobby Wagner to start alongside Jones and that might wind up being the best thing in the world for Jones. Not only does Wagner generate a bit more attention from offensive coordinators but Wagner has taken Jones under his wing. Aaron Donald has remarked about their partnership after seeing the two in the weight room in the early morn “He’s attached to his hip right now, learning everything he can,”.

Jones learning from one of the generation’s best inside linebackers can only lead to good things. One of the biggest lessons Wagner has taught Jones and the rest of the defense is how to not worry about making the fastest play but the right play. Meaning utilizing energy so that it’s not about being FASTER than the other guy but knowing where they’re going to be.

When the Sean McVay era began the Rams’ interior linebackers featured a rotation of Cory Littleton, Mark Barron (converted safety), and Alec Ogletree. A year later, they drafted Micah Kiser. In 2019, they tried to integrate Troy Reeder and Kenny Young (not bad) and it wasn’t enough.

The Rams never really invested in their linebacking corps until last season because they realized they needed at least one stud at that spot. Ernest Jones has already solved so many issues the Rams had defensively and given how much they’re pushing Jones to absorb all the knowledge as he can from Bobby Wagner, he’s clearly part of their future. He’s already made big plays on the biggest of stages and with more time to develop, he could be the Bobby Wagner of his generation or close to it.

If only he were athletic.