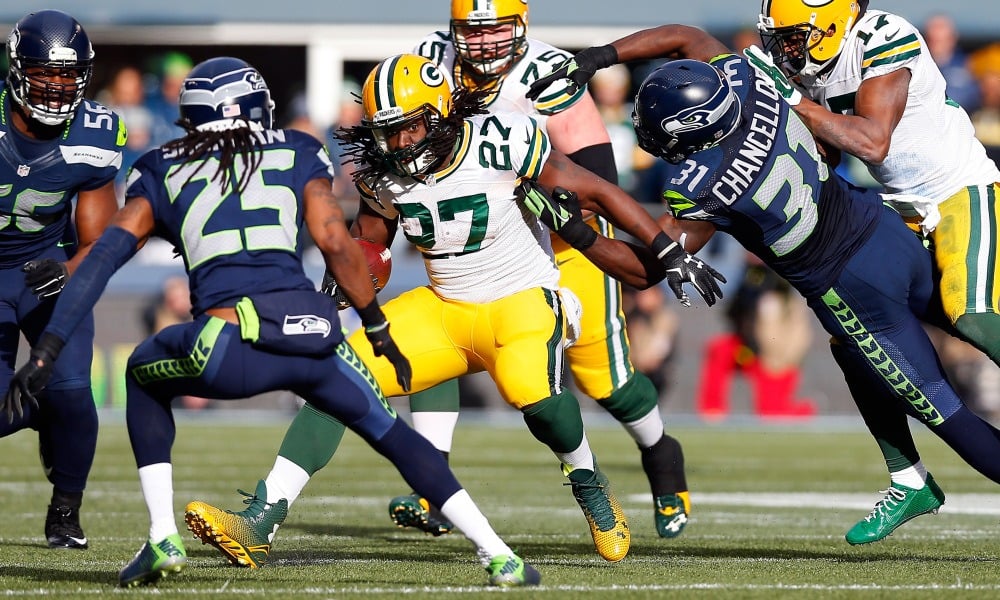 Eddie Lacy, the Seattle Seahawks, and a Glimmer of Hope SEATTLE, WA – JANUARY 18: Eddie Lacy #27 of the Green Bay Packers carries the ball against the Seattle Seahawks during the 2015 NFC Championship game at CenturyLink Field on January 18, 2015, in Seattle, Washington. (Photo by Tom Pennington/Getty Images)

Before I begin this piece, I think I should come clean. I’m having a lot of reservations about advocating for Eddie Lacy, especially considering just how lackluster his performance has been the previous two seasons.

Despite the recent Lacy, I’m willing to suggest he has an opportunity for a bounce back this year with the Seattle Seahawks! Eddie Lacy will have an offense that’s better suited to his skill set, more reliable change-of-pace backups, and, most importantly, a weight loss incentive.

The Seahawks under the guidance of their maestro, Pete Carroll, have been a run dominant team for some time. A major component to their franchise’s success has been the ability to maintain time of possession on offense with power backs that gain effective yards per scrimmage. Granted, the Seahawks were able to maintain this style primarily because of the outstanding play of Marshawn Lynch. However, if there is any back in the post Lynch-era that can replicate even a portion his Lynch’s success, it’s Lacy.

Both of these running backs are true power backs. If you may recall from a few years ago, Lacy was most efficient barreling through defenders or evading them with slight and well-timed cuts, very much akin to Lynch’s running style. I’m fully aware that Lacy is no Lynch, but Lacy will also not have to be as much of a workhorse.

Thanks to the elevated play from C.J. Prosise in the previous season, Carroll has a ready and capable passing-down back. Prosise demonstrated agility and sure hands coming out of the backfield, which means Lacy won’t have to be used on passing downs. This change in his usage will help preserve Lacy’s endurance and health down the stretch of the season. He can solely focus on trucking through people, fighting hard to earn those pivotal short yardage battles, the kind that keep the chains moving.

For the bulk of his tenure on the Green Bay Packers, he was the clear lead back and expected to chug down the field on every down. This, coupled with his advanced weight (trying to be polite here) were a recipe for consistent ankle injuries.

This brings me to my final point, Lacy’s recent (and well-documented) weight issues. Over the past two seasons, Lacy has put on some pounds, so much in fact, he’s looked sluggish. And although the Packers attempted to manage his size, they were never quite successful.

Seattle has developed an excellent approach to this dilemma. In Lacy’s contract there is an incentive clause in which he can get bonuses for meeting specific weight requirements. According to ESPN’s Jeremy Fowler, his most recent weigh-in padded Lacy’s deal with an additional $55,000. I can’t speak for everyone, but I think it’s safe to assume that this money will help motivate Lacy.

Seahawks RB Eddie Lacy passed his weigh-in today, per source. Should collect his $55K for being 250 lb or below.

Obviously, I can’t definitely claim that Eddie Lacy is going to perform well. Heck, I don’t even think he’ll play at the level he was at during his peak years for the Packers. However, there is hope, even if that hope is just a glimmer, and that’s something to hang onto; but maybe hang onto it for some of the later rounds if you’re planning on drafting him for your fantasy team.