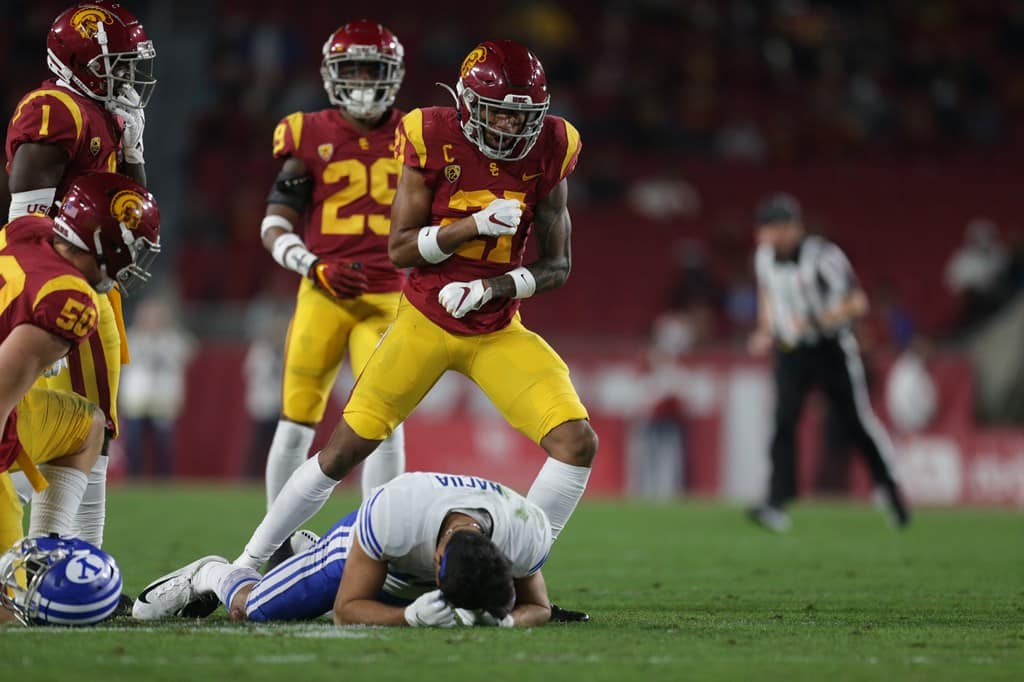 Leading up to the NFL Draft, which is set to take place starting on April 28th and lasting until April 30th, we will be evaluating the draft stock of every Trojan that has a chance to be drafted. This week, we start by evaluating USC safety and captain Isaiah Pola-Mao‘s draft stock.

USC Safety Isaiah Pola-Mao has been with the Trojans through thick and thin, as the 2022 season was his third season starting for the Trojans and his fifth season overall with the team. From the highs of the Sam Darnold era to the lows of the end of Clay Helton‘s tenure, Pola-Mao’s presence was one of the few constants on a consistently evolving USC team.

Throughout those five years, Pola-Mao racked up some pretty impressive stats as a free safety for the Trojans. After spending little time on the field in his first two years due to shoulder injuries, Pola-Mao emerged as a starter in his third season, being named an All-Pac-12 honorable mention with 73 tackles and 4 interceptions. He appeared to be on a similar pace in the COVID-19 shortened 2021 season, and he posted similar stats in 2022 with 57 tackles and one turnover to his name.

While his resume is fairly impressive and consistent, NFL teams are not likely to be enamored with a player that was never considered better than a Top 3 safety in the PAC-12. Of the USC players with legitimate chances of being drafted in April, Pola-Mao was the only one that was not invited to the NFL Combine, which could be a sign that the NFL is not very high on Pola-Mao due to his moderate, though consistent, production.

Despite this, there is plenty about Pola-Mao that should intrigue teams, particularly in modern NFL defenses. Pola-Mao has extraordinary length for the free safety position at 6’4″, helping to give him nice range at the position and a good frame to add strength to. Couple that with Pola-Mao’s reported (though possibly inflated) 4.54 high school 40-yard dash time, and you have the physical tools for a nice free safety prospect.

However, the way Pola-Mao plays the game makes him an even better fit for today, where versatility is the name of the game. Pola-Mao plays with occasionally reckless ferocity, and he is willing to make a hit on anyone. With some more size in an NFL training and conditioning program, Pola-Mao could become a free safety with the potential to play in the box. In the short term, it shows that he would certainly be willing to play a role as a ferocious special teamer, where he would almost certainly have to excel to start his career.

Unfortunately, that ferocity is part of what hurts Pola-Mao’s draft stock. Pola-Mao’s first two college seasons ended early with shoulder injuries, perhaps in part due to his shoulder-first tackles. Hopefully, an NFL team’s strength and conditioning program can focus on ensuring the strength and durability of Pola-Mao’s shoulders. Pola-Mao also needs to learn to bring his arms through on those tackles more, as missed tackles are a noteworthy part of his game thus far in his career.

So, with all of this said, where does this put Pola-Mao’s draft stock?

As evidenced by his lack of combine invite, Pola-Mao looks to be on the outside of the draft looking in. The NFL combine invite list is created based on the collective recommendations of NFL team scouts. It appears that the NFL as a whole is lower on Pola-Mao as a prospect than Draftek and TDN‘s Predictive Board, which have Pola-Mao ranked as the 281st and 217th best prospect, respectively. TDN’s ranking would get Pola-Mao drafted, while Draftek would leave him just outside the 259 players drafted.

Pola-Mao looks the part of a multi-season project at safety with the tools and the driven mindset to play a special teams role as he gets to NFL strength levels. Since it only takes one team, it is not out of the question that Pola-Mao is selected with a 7th round pick, but it looks like nothing will be guaranteed for Pola-Mao come draft day.

Best Fits: Any team needing special teams help, with a preference for teams with a track record of developing defensive talent, like the Baltimore Ravens or New England Patriots Hello, Trojan fans! I am hyped to be covering the USC Trojans football team for LAFB! I am now a two-time Trojan -- I graduated from USC in 2020 and now am a student at the Keck School of Medicine of USC. I grew up in Armuchee, Georgia, but I always had some Trojan in me from my family, and the team always provided me with good football to keep me a fan. Fight on!